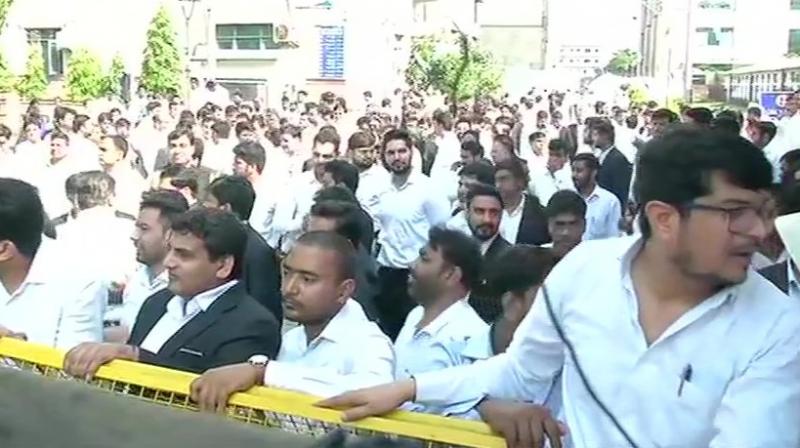 The plea claimed that after police firing on lawyers at Tis Hazari court on November 02, some alleged incident of lawyer and cop attacks have taken place due to an altercation between the two. (Photo: ANI | File)

New Delhi: In a case pertaining to the lawyers versus police clash at Tis Hazari Court, Supreme Court on Monday said that it would wait for the Delhi High Court order as it was already hearing the matter.

A two-judge bench of the Apex Court, headed by Justice Arun Mishra and also comprising Justice Indira Banerjee observed, "Delhi High Court is hearing the matter. So let us wait for it."

"We don't want to multiply the process further. Let us wait for the HC order," Justice Mishra said.

Justice Mishra also made it clear that the petition is not dismissed but will be heard later.

Mani had filed the PIL before the Apex Court seeking action against cops who allegedly sat on a dharna at ITO following Tis Hazari clashes with lawyers and in protest against attacks on them by advocates at various court complexes.

The Apex Court, however, on Monday allowed Mani to place orders passed on the issue by the High Court so far, and fixed the matter for further hearing till Monday, December 16.

Supreme Court lawyer, GS Mani, and many others had on November 07, knocked the doors of the Supreme Court seeking a direction and disciplinary actions, including registration of FIR, against Delhi Police personnel who had participated in the protest at the PHQ.

The petition claimed and sought a direction from the Apex Court, against those Delhi Police personnel, who conducted and participated in an unprecedented 11-hour long protest and agitation held on November 5 in and around the Commissioner of police headquarters at ITO

The plea claimed that after police firing on lawyers at Tis Hazari court on November 02, some alleged incident of lawyer and cop attacks have taken place due to an altercation between the two.