India   All India  09 Dec 2021  Dhankhar asks Didi to review her call to limit BSF in West Bengal
India, All India 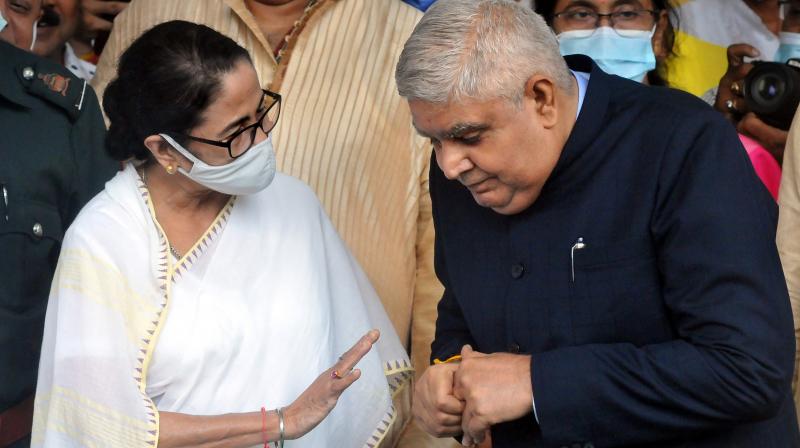 In a letter, Mr Dhankhar wrote to Ms Banerjee, he wrote that he is deeply concerned at Mamata's 'directives' concerning BSF. (PTI)

Kolkata: West Bengal governor Jagdeep Dhankhar on Thursday expressed his "deep concerns" to chief minister Mamata Banerjee about her recent direction to the state police to restrict the Border Security Force (BSF) to operate beyond their previous jurisdiction of 15 kms in the state. He also sought the Trinamul Congress supremo to review her instruction.

In a letter Mr Dhankhar wrote to Ms Banerjee, "Deeply concerned at your 'directives' concerning BSF, including BSF is allowed for 15 km, that too with the permission of the police to State apparatus during the course of the official administrative meeting at Gangarampur on 7.12.2021. These are not in sync with law or the recent Union Home Ministry notification increasing jurisdiction of the BSF in the State from 15 km to 50 km. Your stance has sent disturbing signals and is potentially alarming for federal polity and national security."

He observed, "In the State having international border with Bangladesh, Nepal and Bhutan, BSF and Central Armed Police Forces play significantly well defined crucial role from the perspective of national security and containing criminal illegal activities. There is obvious need to generate bonhomie and not confrontation; cooperation and not combat amongst these agencies and State apparatus."

The governor underlined, "To ensure this it is compulsively expedient that the law and order agencies of the State and the CAPF play their respective roles and perform their assigned duties in a coordinated and synergical manner to ensure overall safety and security. Towards this appropriate sensitization of the State apparatus is called for so that mutual confidence is bolstered, coordination and cooperation is enhanced amongst the various State and Central Security agencies that need to work in tandem and togetherness."

He added, "This imperatively calls for, in public and national interest, that your directives, instructions as also stance regarding functioning of BSF in the State be revisited so as to generate an environ of harmony and cooperation. Given the critical and momentous significance of the issue, while expecting an early update, am sure appropriate steps, as stated, would be urgently taken at your end."