India   All India  10 Jan 2018  Of Tashkent Declaration and how Shastri died at the altar of India-Pak friendship
India, All India

The talks began in Tashkent on January 3, 1966 with Kosygin meeting Shastri and Ayub, initially, separately before the later summit meetings. 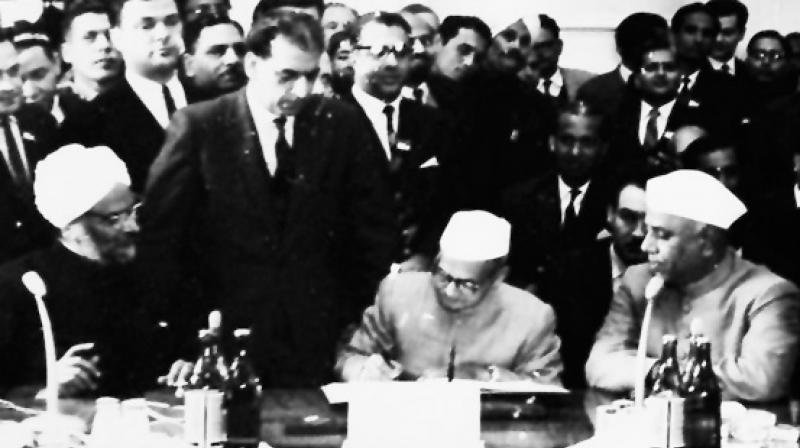 It was 52 years ago, this day that the Tashkent Declaration was signed by then Prime Minister Lal Bahadur Shastri and President of Pakistan Field Marshal Ayub Khan. Unfortunately, within a few hours after affixing his signatures on the historic document, India’s second Prime Minister, who had succeeded Jawaharlal Nehru only 18 months ago, died of a cardiac arrest, which came as a big shock to not only the people of India, but the entire world.

Even before the ceasefire, following the 22-day war, on September 18, 1965, the Russian (then Soviet Union) Prime Minister (chairman of the council of ministers) Alexei Kosygin offered “his good offices for bringing about improved relations between India and Pakistan”. This was brought to the notice of the House where members of Parliament, cutting across party lines, supported the ceasefire but a number of them wanted India to retain Haji Pir pass, which the Army had recently captured to prevent infiltration. The MPs had foreseen that in any negotiations both countries will have to fall back to positions they held before hostilities. Amongst the notable parliamentarians who lauded the Prime Minister were Acharya J.B. Kripalani and Vijaya Lakshmi Pandit. Pandit, who was elected to the Lok Sabha from the seat vacated by her illustrious brother, stated: “The story of Pakistan’s perfidy and deceit… is a shameful one but we are a proud people today, for we have given a reply in no uncertain terms… I would like… to pay a respectful tribute to the bold leadership of the Prime Minister in this crisis.”

Though India readily accepted the offer of Kosygin’s mediation on September 23, Pakistan, after some hesitation, did so on November 11, 1965. Kosygin’s mediatory efforts were also supported by US President Lyndon B. Johnson and British Prime Minister Harold Wilson. Justifying his decision to accept the Soviet offer of mediation, Shastri stated in Parliament: “No one can ever contest the view that ultimately India and Pakistan will have to live together as peaceful neighbours. We cannot therefore say no to any efforts, which may help bring about such a situation, made by those who are sincere and genuine in their feelings of goodwill and friendship.” Before leaving the country for the capital of Uzbekistan, Shastri said in an interview with All India Radio (AIR): “Jawaharlalji used to say the Soviet Union had given us many gifts; the most precious gift was the gift of friendship. I can do better than to echo these sentiments.”

The talks began in Tashkent on January 3, 1966 with Kosygin meeting Shastri and Ayub, initially, separately before the later summit meetings. Earlier, soon after the ceasefire, the Security Council had passed a resolution demanding the withdrawal of all armed personnel to positions held by them prior to August 5, 1965. Kosygin stressed upon implementation of this resolution to which the USSR, alongwith other powers, was a party. When the Indian Prime Minister told Kosygin that under no circumstances India would give up Haji Pir pass as it had a great strategic importance, and was won “after a heavy sacrifice of our brave military personnel”, Kosygin replied that if India did not withdraw from Haji Pir (and Tithwal), Pakistan will not withdraw from Chhamb and other Indian territories occupied by Pakistan and then there will be no agreement. Similarly, to Ayub Khan, who was insisting upon inclusion of Kashmir in the agenda and refusing to vacate Chhamb, the Soviet premier firmly told that the failure of talks would not only lead to Pakistan’s loss of prestige in the world, but resumption of war which his country could ill-afford.

By the evening of January 9, it appeared that the talks were failing, as both sides were not willing to compromise on their respective stands. The morning newspapers in India — on January 10 — carried dispatches from Indian correspondents in PM’s entourage in Tashkent — Inder Malhotra (Statesman), Krishan Bhatta (Hindustan Times), Dev Murarka (Indian Express), Kuldip Nayyar (UNI) and G.K. Reddy (Times of India). They all reported virtual failure of talks. While Inder Malhotra reported: “Mr Kosygin was trying desperately to save the talks from total failure and collapse.” Bhatia opined: “Unless a miracle happens, the Tashkent Conference should end tomorrow on an unmistakable note of disagreement between Prime Minister Shastri and President Ayub Khan of Pakistan.”

But the miracle did happen. At lunch time, on January 10, with the determined efforts of Kosygin, ably assisted by his dynamic foreign minister Andrei Gromyko, Lal Bahadur Shastri and Ayub Khan, despite strong reservations of his foreign minister Zulfikar Ali Bhutto, signed the historic declaration which brought peace to the subcontinent, however temporarily. But that has been the history of India-Pakistan relations. The news of the success at Tashkent was hailed in the country, but there were hostile voices too, amongst them Jana Sangh and the socialist parties. In his biography Lal Bahadur Shastri: A Life of Truth in Politics, C.P. Srivastava, who was a joint secretary to the PM and had accompanied him to Tashkent, recorded a call between Venkataraman (PM’s PS in Delhi) and Sahai (PM’s PA in Tashkent): “While Venkataraman was still on the telephone, the Prime Minister asked Sahai to find out from him what the general reaction to the Tashkent declaration was. Sahai put the question to Venkataraman who replied that ‘the declaration has been generally well received, except Atal Behari Vajpayee (Jana Sangh) and S.N. Dwivedy (PSP)’. In fact, the Jana Sangh, which called the agreement, ‘a betrayal’, had planned to ‘greet’ the Prime Minister with black flags at Palam (now Indira Gandhi) airport. But that was not to be. With his death Lal Bahadur became a martyr to the cause of India-Pakistan friendship, as did the Mahatma less than two decades, earlier, for the cause of Hindu-Muslim unity. Alongwith other parliamentarians Vajpayee and Dwivedy paid glowing tributes to Shastri and his grand success in promoting peace between the two neighbours.”

Like Srivastava, many journalists who were in the PM’s delegation have written detailed accounts of the Tashkent Declaration and Shastri’s unfortunate demise. They all expressed the view that Shastri’s death was natural and there was no question of any foul play. This is best summed up by L.P. Singh, who was then the home secretary and was part of PM’s entourage in Tashkent: “The circumstances of Shastri’s death at Tashkent were explained in a statement in Parliament over 25 years ago and the report of the group of physicians, including Shastri’s Indian physician, Dr Chugh, was placed on the table of the House. After this, there should have been no doubt left in anyone’s mind that Shastri had died of a sudden, severe heart attack. But some in India needlessly look for conspiracy theories to explain major occurrences, including the death of a national leader.” But that is India, where people get carried away be it rumours or falsehood. Ultimately, it is Satyamev Jayate.

The writer, an ex-Army officer, is former member National Commission for Minorities and a political analyst.