Dikshit, 80, will have a tough task of reviving Congress party in Dehi with just few months remaining for Lok Sabha polls. 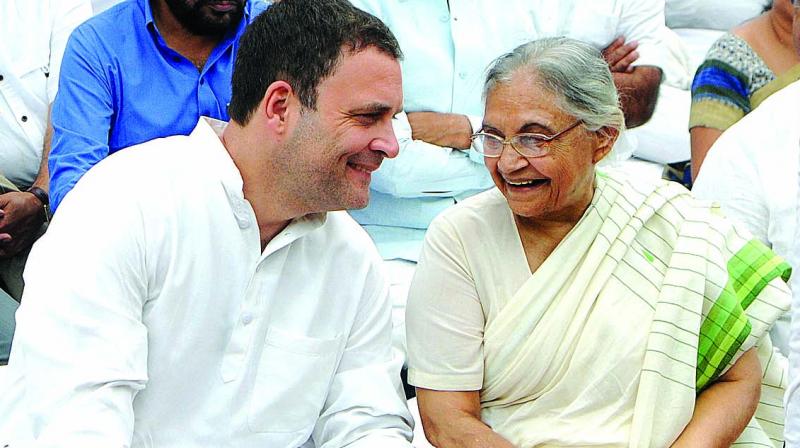 New Delhi: Former Delhi chief minister Sheila Dikshit was on Thursday brought back to lead the Delhi unit of the Congress party ahead of the Lok Sabha polls.

Dikshit, 80, will have a tough task of reviving the party in the national capital with just a few months remaining for the Lok Sabha polls.

Apart from Dikshit, Devendra Yadav, Rajesh Lilothia, Haroon Yusuf have been appointed as working presidents of the Delhi Congress, said PC Chacko, the AICC member in charge of Delhi Congress.

After the announcement was made, Sheila Dikshit said, “I am honoured that the party has given me this opportunity.”

Dikshit's predecessor, Ajay Maken who resigned from the post earlier this month citing health issues, took to Twitter to congratulate the leader.

"Congratulations to Sheila Dikshit for being appointed as the state Congress chief again. I got the opportunity to work and learn under her as parliamentary secretary and cabinet minister. I believe that under her leadership, we will play the role of strong opposition against PM Modi's and Arvind Kejriwal governments," Maken tweeted in Hindi.

One of the most popular leaders in the national capital, Dikshit served as Delhi chief minister for a period of 15 years from 1998 to 2013. Her popularity, largely owing to the development works she undertook to transform the city, including the Delhi Metro, continues till date.

However, after taking over as the state party chief, Dikshit will have to deal with the contentious issue of an alliance with the Aam Aadmi Party (AAP).

Maken’s resignation came at a time when there has been a speculation that the Congress party is willing to forge an alliance with the AAP. However, Maken was reportedly against the idea of such alliance claiming that the popularity of Arvind Kejriwal-led party was fast deteriorating.

Sheila Dikshit was also said to be against this alliance in the past. However, in recent times she has been more accommodating with the idea. “The high command, Rahul Gandhi and all will decide and whatever they decide will be acceptable to all of us", she had said.