Over past two days, agitators across North-East, including Assam, have blocked thoroughfares and rail tracks, seeking revocation of Bill. 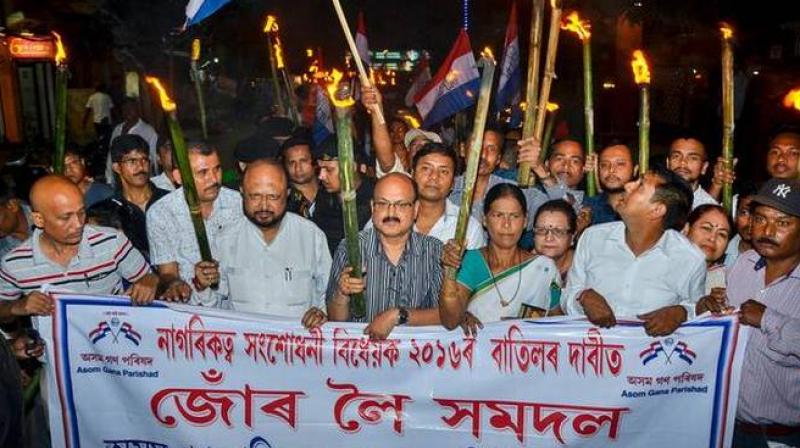 Citizenship (Amendment) Bill, which was passed by LS 2 days ago, seeks to grant Indian citizenship to non-Muslims who fled religious persecution in Bangladesh, Pakistan and Afghanistan and entered India before December 31, 2014. (Photo: File | PTI)

Guwahati: Protests over the contentious Citizenship bill continued in Assam on Thursday with students, lawyers and doctors raising their voice against the legislation across the state.

The Citizenship (Amendment) Bill, which was passed by the Lok Sabha two days ago, seeks to grant Indian citizenship to non-Muslims who fled religious persecution in Bangladesh, Pakistan and Afghanistan and entered India before December 31, 2014.

With 'gamosas' (Assamese scarf of honour) in hand, people observed 'Sankalpa Divas' in front of the state secretariat here, asserting that the Bill threatened the existence of Assamese people.

They warned that the "prime minister and his cabinet colleagues will be stopped from entering the state" if their interests were harmed.

Krishak Mukti Sangram Samiti (KMSS), which has been leading the agitation along with its 70 partner organisations, had vowed on Wednesday that Prime Minister Narendra Modi and Union ministers would not be allowed to enter the north eastern till the Citizenship (Amendment) Bill was scrapped.

At Gauhati Medical College and Hospital, junior doctors on Thursday wore black badges to work, while members of the Assam Pradesh Congress Committee's legal department raised slogans against the government.

'Joi Ai Asom' (glory to mother Assam) rented the air as agitators, holding gamosas, took oath that they will "protect the interests of indigenous people".

At several educational institutes in Guwahati, students were seen boycotting their classes to take to the streets for a protest march to the state capital Dispur, but their attempt was thwarted by security forces.

Similar protests were also observed by students in other parts of the state with some of them regretting that they were forced to come out of their classrooms as the government failed to ensure their protection.

The Bill is draconian and communal, KMSS chief Akhil Gogoi told reporters outside the secretariat. "If this bill is accepted then the very secular fabric of India will be destroyed. Assamese people have always opposed illegal immigration. If the Citizenship (Amendment) Bill is passed, at least 190 million people from Bangladesh will find their way to Assam, threatening the existence of its original inhabitants," Gogoi said.

Referring to the status of the legislation in Parliament, he said, "Yesterday, it was a victory of sorts as the Upper House did not take up the Bill. We demand that the government revoke the legislation immediately".

Talking about the next course of action, the KMSS chief said, "We will undertake economic blockade programme all across Assam, hold demonstrations against the prime minister, Union cabinet ministers and the chief minister. We will wave black flags at all BJP members and ministers".

Asked about the validity of the National Register of Citizens (NRC) amid the controversy over the Citizenship Bill, he said, "If the Bill is passed, NRC will become redundant. The NRC has been updated and steps will be taken to oust foreigners from he state".

The draft NRC, which was published on July 30 last, had acknowledged 2.9 crore people as Indian citizens out of 3.29 crore applications. Over 40 lakh people did not make it to the list.

The KMSS leader clarified that he along with other protesters would also refrain from participating in the upcoming Bihu Festival. "We will visit villages across the state to apprise the people about the Bill that poses a danger to their existence," he added.

Over the past two days, agitators across the northeast, including Assam, have blocked thoroughfares and rail tracks, seeking revocation of the Bill.

The protesters clashed with the police, gheraoed Chief Minister Sarbananda Sonowal's house at his native place in Dibrugarh and damaged vehicles.

An 11-hour shutdown was called in Assam on Tuesday by the All Assam Students Union (AASU) and North East Students' Organisation (NESO), and supported by over hundred organisations, bringing life to a standstill in Assam.