MEA describes ‘interactions’ as ‘positive’, no member from Middle East. 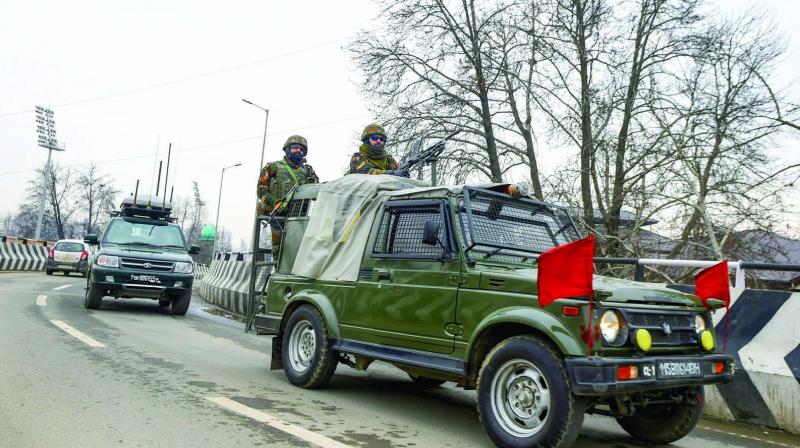 A security vehicle escort the cavalcade of ambassadors in Srinagar on Thursday. (Photo: PTI)

New Delhi: Envoys of 15 countries from a cross-section of regions ranging from the United States to East Asia, South-East Asia, Africa and Latin/South America were taken by the Indian government on a two-day visit beginning Thursday to the newly-created union territory of Jammu and Kashmir, where they met security officials, members of civil society, political leaders and the local media there. The ministry of external affairs (MEA) said the envoys had been taken there to “see the efforts being made by the government to bring the situation to normal”, adding that “normalcy had been res-tored to a large extent”. The MEA also described the “interactions” there as “positive”. Envoys belonging to the United States, South Korea, Vietnam, Bangladesh, Fiji, Maldives, Norway, Philippines, Morocco, Argentina, Peru, Niger, Nigeria, Guyana and Togo comprised the group. Norway —- which is not part of the European Union (EU) —- was the only European country represented. But there was no envoy from either the EU countries or the Middle East. Another prominent absentee was Russia. The MEA indicated that more such visits could be planned and that EU-member nations’ ambassadors may be taken separately as a single group to J&K later. The presence of the United States was significant, given the close ties between New Delhi and Washington in recent years. Bangladesh and the Maldives, two Muslim-majority countries in India’s immediate neighbourhood, were also significantly represented. Vietnam, India’s closest friend in South-East Asian regional bloc Asean, was also represented. On the visit, New Delhi said it was “making a beginning, after five months” by “taking this group to J&K”.

Government sources late on Thursday evening said a “military briefing” given to the visiting 15 foreign envoys in Srin-agar “focused on cross-border terrorism with videos of infiltration”. Sources said questions about revoking of Article 370 (that had granted special status to J&K) figured during discussions later in the day between political leaders in Kashmir and the 15 foreign envoys. Sources also said that in a meeting between the local media and the foreign envoys, the demand for lifting of continuing Internet restrictions imposed by the Indian Government was also raised by the local media.

Sources pointed out the envoys also had a “informal chat with nearly 100 youth from across Jam-mu and Kashmir in small private groups”, adding that the foreign envoys "drove through the city of Srinagar, (and) could get the feel of traffic, and open shops”.

On the absence of the EU ambassadors, the MEA on Thursday said, “We need to correct a perception. There are reports that EU ambassadors did not go because they thought this was a guided tour. Our understanding is very different. We wanted this group to be broad-based. And there were restrictions in numbers. You can’t take too large a number, when you are moving and organising meetings. So we wanted this group to be a manageable size. We wanted this group to represent different geographical regions... Subsequently, we will try to organise similar visits to J&K. On EU, when we approached them, they welcomed that decision  because many of their ambassadors had requested for a visit to J&K...”

Our understanding is that they wanted to visit in a group. On many issues, they take a group position. The invitation was not sent to all the members of the group because it would have clearly made the group too big. We were also told by some of the members that this was organised at a short notice. At no stage did we tell them that a certain meeting cannot be organised. We are looking at the possibility of organising a visit by the EU Ambassadors. Let’s see how it works out.”