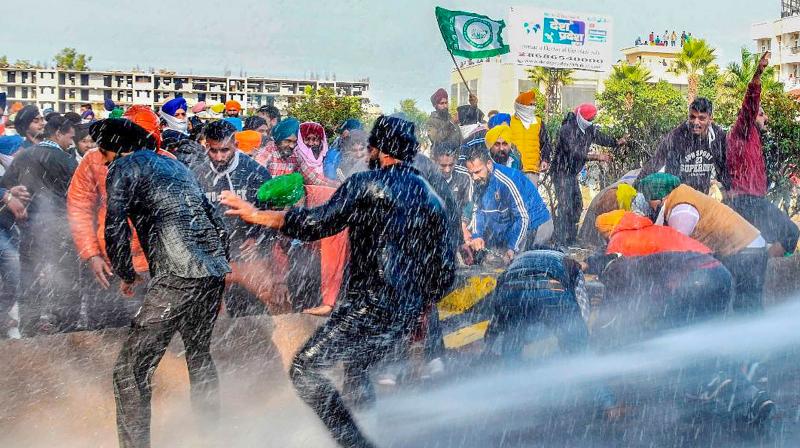 Police use water cannons to disperse farmers during their Kisan Mahapanchayat rally in Kaimla village, in Karnal. (PTI)

Chandigarh: Protesting farmers on Sunday took control and ransacked the venue of 'kisan mahapanchayat' programme at Kaimla village in Haryana's Karnal district where Chief Minister Manohar Lal Khattar was to address people to highlight the benefits of the Centre's three agriculture laws.

However, farmers reached the venue and disrupted the 'kisan mahapanchayat' programme.

They damaged the stage and broke chairs, tables and flower pots at the venue.

The farmers also took control over a makeshift helipad where chief minister's helicopter was to land.

The programme was cancelled due to an unruly act by farmers at the behest of BKU leader Gurnam Singh Charuni, BJP leader Raman Mallik said.

Police had made elaborate security arrangements for the chief minister's visit to the village where he was to speak to people to highlight the benefits of the Centre's three farm laws.

Under the banner of Bharatiya Kisan Union (Charuni), farmers, who have been demanding that the laws be repealed, had earlier announced to oppose the 'kisan mahapanchayat'.

Farmers were carrying black flags and shouting slogans against the BJP-led government as they attempted to march towards Kaimla village.

Police had put up barricades at the entry points of the village to prevent protesting farmers from reaching the programme venue.

The situation turned tense as farmers were adamant that they would not allow the chief minister to hold the programme.

Policemen were seen trying to pacify the agitating farmers but they went ahead to take control of the stage.

"We will not allow the government to hold this programme," a protester said.