Clashes between stone-pelting youth and the police were reported from Sopore’s main chowk, main bazaar and Batpora. 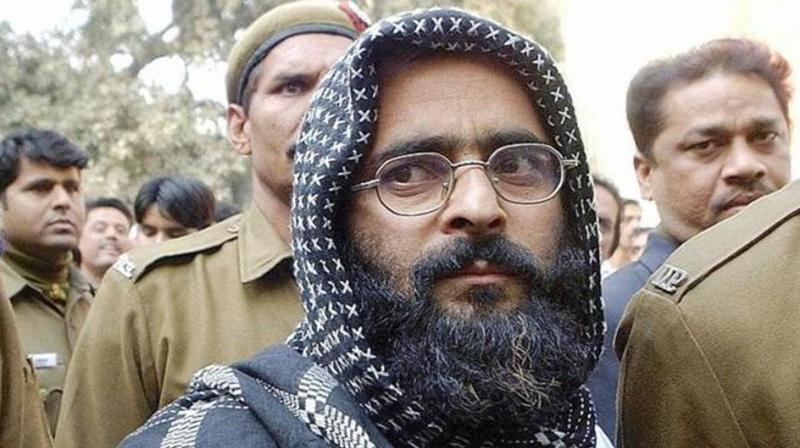 Srinagar: Security forces Thursday enforced a lockdown in parts of Srinagar and parts of the Valley to prevent protests on the death anniversary of Parliament attack convict Muhammad Afzal Guru.

Guru, a resident of Doabgah suburb in Kashmir’s north-western town of Sopore, was hanged in Delhi’s Tihar jail on February 9, 2013.

Clashes between stone-pelting youth and the police were reported from Sopore’s main chowk, main bazaar and Batpora.

J&K director general of police S.P. Vaid said no curfew was enforced on any part of the Valley; only “mild restrictions” were placed. However, large contingents of the Central Reserve Police Force and local police with riot gear fanned out at dawn to enforce lockdown in areas considered politically volatile.

In Old Srinagar areas, security forces blocked roads by laying razor wires. The police said they will remain at high alert for the next three days, and security restrictions have been ordered in seven police stations areas in Srinagar.

A report from Sopore said that hundreds of security personnel in riot gear were out on the streets as people in large number began visiting Guru’s family in Doabgah early Thursday morning.

Elsewhere in the Valley, the separatists’ call for a shutdown was obeyed widely by people. While shops in most parts of Srinagar remained closed, only skeleton transport services ran on some routes. Rail services through the Valley were suspended “as a precautionary measure”, an official said.

An alliance of separatist leaders have asked people to converge at the summer headquarters of the UN Military Observers in India and Pakistan (UNMOIP) in Srinagar’s Gupkar Road on Friday. The alliance has renewed its demand for retrieving the mortal remains of Guru and pro-independence Jammu Kashmir National Liberation Front (JKLF) co-founder Muhammad Maqbool Butt. The separatists say they want to give a “decent and befitting burial”.

Butt was charged with the murder of Indian intelligence officer, Amar Chand, in Sopore back in the mid-1960s. He was executed in Tihar jail in 1984, and his mortal remain, as Guru’s, were buried on the prison’s premises.

Guru’s son Ghalib said the separatist leadership has failed the family in seeking the return of his father’s mortal remains. “It seems they (separatists) have with time forgotten what my father did for the nation,” Mr Ghalib was quoted as saying in a local newspaper.

Key separatist leaders have also been placed under house arrest or detained in police stations. Some others, including Muhammad Yasin Malik, have gone underground.

The security restrictions in Srinagar are likely to continue through February 11, which is observed as “black day” in Kashmir to mark the death anniversary of Butt.

A senior police official said a meeting will be held every evening to decide the amount of restrictions to be imposed the next day.