'Modi Jalebi' becomes talk of the town in poll-bound UP

Suresh Sahu, who is the owner of a sweet shop, sells the ' Modi Jalebi' free of cost in a bid to woo customers. 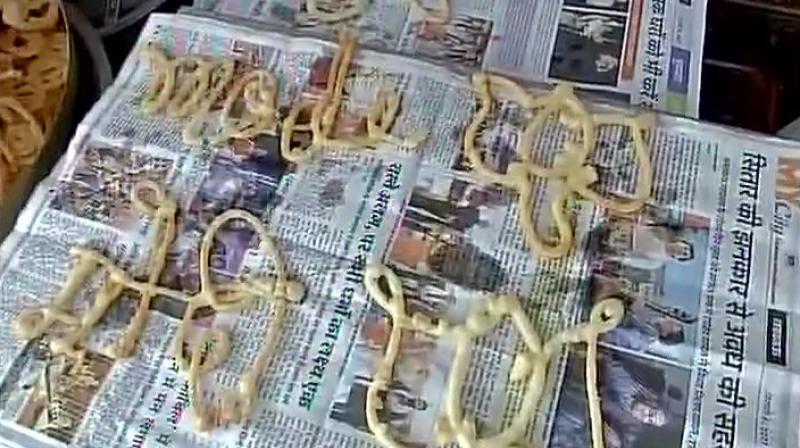 Jalebi are also being made in the form of BJP party symbol 'Lotus' in the sweet shop. (Photo: ANI Twitter)

Lucknow: While all the political parties are leaving no stone unturned to woo the voters ahead of the Uttar Pradesh assembly election, a supporter of the Bharatiya Janata Party (BJP) is hogging the limelight in Lucknow for his unique 'Modi Jalebi'.

With a day left for the first phase of polling in the state, 'Modi Jalebi' has become talk of the town with many people visiting the shop to eat it.

Suresh Sahu, who is the owner of a sweet shop, sells the ' Modi Jalebi' free of cost in a bid to woo customers and thereby garner support for Prime Minister Narendra Modi in the upcoming polls.

Jalebi are also being made in the form of BJP party symbol 'Lotus' in the sweet shop.

"We have been supporters of BJP for a very long time. Since I used to be busy with my work and couldn't take out time for the party, so I decided to extend my support in this way," Sahu said.

The local residents and the BJP leaders have also lauded Suresh for his attempt.

"When I step out of my house and see that the jalebi is being made at the sweet shop in the form of Prime Minister Modi's name, I feel very good," said BJP leader Kaushal Kishor.

The worker who makes jalebi said that it took lot of practice to learn as how to make the jalebi in the form of lotus and Prime Minister Modi's name.

"We support BJP and have practiced a lot to make this. We feel very goor while making these jalebi," said the worker.