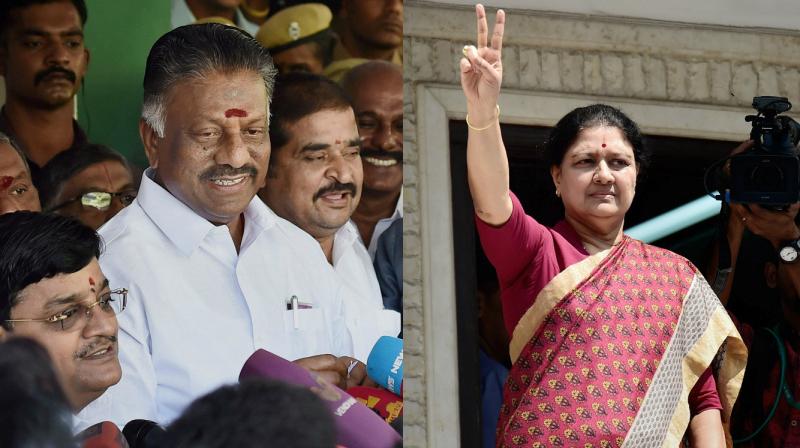 Chennai: Tamil Nadu governor C. Vidyasagar Rao on Thursday bought time from caretaker chief minister O. Panneerselvam and AIADMK general secretary V.K. Sasikala to decide on their demands, saying he would get back to them after “consulting legal experts.”

While Mr Panneerselvam demanded that the governor allow him to prove his majority on the floor of the House since many MLAs are in “captive custody” and that their signatures of support to Ms Sasikala were “forged”, Ms Sasikala staked her claim to form the government by submitting a long list of MLAs supporting her.

Reports said the governor, in his communication to the Centre late on Thursday night, called the situation in Tamil Nadu “fluid” and that “claims by both sides” need to be verified.

Sources said the governor gave a “patient hearing” to both leaders who met him separately after he arrived from Mumbai Thursday afternoon.

While Mr Panneerselvam declared after his meeting with the governor that “dharma” will triumph and “good” will eventually happen as he had explained the real situation to the governor, Ms Sasikala did not address the media after she led a delegation of senior ministers, including Dindigul Sreenivasan and D. Jayakumar to the governor, to stake her claim. Her relative and former MP, T.T.V. Dinakaran was also present at the meeting. 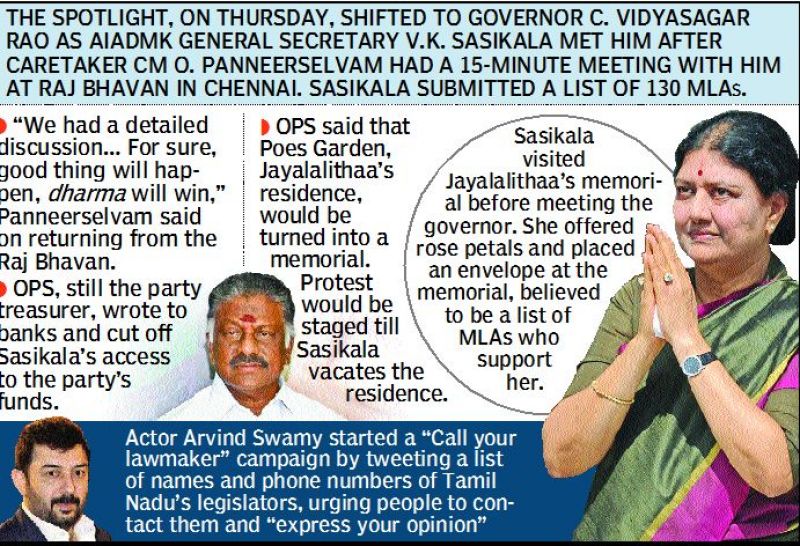 “Chinamma met governor at the Raj Bhawan and handed over documents relating to her election as leader of the AIADMK legislature party,” a statement from the party said without elaborating.

Party sources said she submitted a letter of support from “134 MLAs” to the Governor and requested him to swear her in as chief minister immediately.

Before heading to the Raj Bhavan, Ms Sasikala paid an “emotional” visit to J. Jayalalithaa’s memorial on Marina Beach. She paid her respects by placing the list of MLAs before it.

Sources in the OPS camp told The Asian Age that they insisted the Governor allows the chief minister to “prove his majority” on the floor of the House since many MLAs have been “forced to sign” the letter in support of Ms Sasikala under duress. They also alleged that many MLAs in “captive custody” for the past two days want to “escape” and come to their side, and produced MLA Shunmuganathan who is alleged to have told the Governor that he was forced into a bus by the Sasikala camp and that he had “escaped from their clutches.”

AIADMK Rajya Sabha MP V. Maitreyan, who has taken OPS’ side, said the Governor should allow “us to prove our majority in the Assembly.” “Many MLAs may be with them, but their hearts are with us. The only place where the MLAs can act according to their conscience is the Assembly,” he said.