India   All India  10 Feb 2017  SP-Congress tie up an alliance of families who looted the country: Modi
India, All India

SP-Congress tie up an alliance of families who looted the country: Modi

Modi also took a jibe at Rahul Gandhi, saying that if you search Google, the most jokes are on the Congress Vice President. 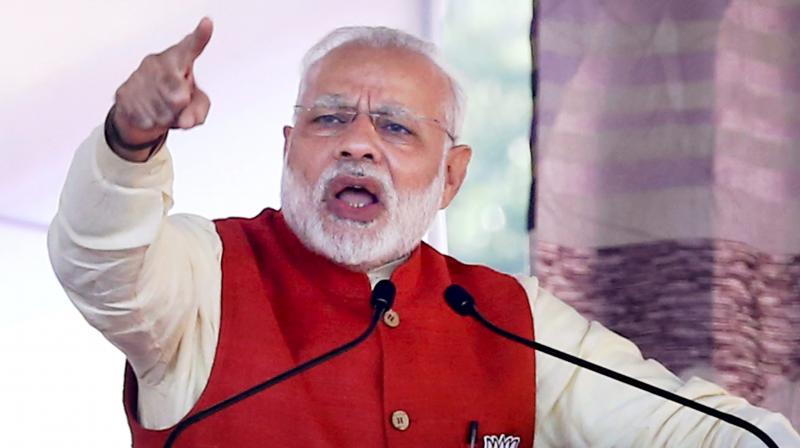 Bijnor: Taking up issues of dynastic politics and law and order to target Samajwadi Party-Congress alliance, Prime Minister Narendra Modi today called it a tie-up between two families who have "looted" Uttar Pradesh and the country, and mocked Rahul Gandhi saying no leader has as many jokes on him as he does for his "childish" acts.

"When both families were separate, they caused so much destruction in the country and UP. What will happen when they have joined hands. If you want to save UP, you will have to save it from these families," he said addressing a rally here.

With BJP locked in a tough fight in the state assembly polls, the Prime Minister dwelt at length on the "family rule" of the Yadav clan and cases of major crimes under its watch, besides "corruption" during the reign of Akhilesh Yadav and Mayawati governments.

Modi, who has been accused by Congress of using foul language and repeatedly humiliating opposition after his raincoat jibe against former Prime Minister Manmohan Singh, persisted with his shrill attack on rivals saying they have only served their families.

With Jats playing a key role in the two phases for which polling will be held tomorrow and February 15, he said a BJP government in the state will set up a farmers welfare fund named after Charan Singh, a noted Jat leader.

Clearing the dues of sugarcane farmers and waiving loans of small and marginal farmers, both promises being part of the BJP's manifesto, will be a top priority for the state government if his party is voted to power, he said.

It was, however, his attack on the SP-Congress alliance and the ruling Yadav family which was the focus of his speech.

"I do not know Akhilesh Yadav much. I have met him a few times in meetings and it seemed to me after reading various reports that he is an educated young man who is trying to learn. I was hopeful that a young man will be fit for politics in 5-10 years.

"On the other hand there is a Congress leaders who does so many childish acts that if you do a search on computer, you will find that no other leader has as many jokes on him as he has.

"Even senior Congress leaders keep a distance from him. When the leader avoided by his senior party leaders was embraced by Akhilesh, then I began doubting his wisdom. One can make blunders but not of this kind," Modi said, targeting the Congress vice president.

He said it is an alliance between two families, one of which "looted" the country and the other Uttar Pradesh.

He noted that so many members of the extended ruling Yadav family are MPs, MLAs and serving in various other capacities in government.

While Bijnor with about 2,000 villages has one MP, there are so many of them in Parliament, assembly and other government bodies from Safai, the family village of Akhilesh Yadav, he said.

They made one caste (Yadav) as their vote bank but served only their family, he said.