Modi said corruption in Uttarakhand does not need to be proven in the courts of law. 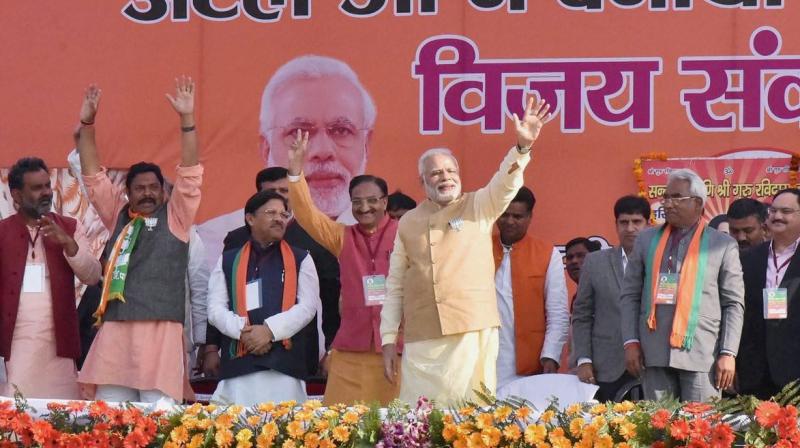 Haridwar: Noting that next five years are as vital for Uttarakhand as they are in the growth of any 16-year-old, Prime Minister Narendra Modi on Friday asked people to vote out the government which had "tainted the name of Devbhoomi" and replace it with one that could translate Atal Behari Vajpayee's vision for the state.

"The sixteenth year is very important in the life of everyone because the next five years determine the shape of things to come. So is the case of Uttarakhand in the 16th year of its existence.

"The next five years will determine the direction in which it is going to move," Modi said addressing the party's Vijay Sankalp rally at Rishikul Maidan here.

He said corruption in Uttarakhand does not need to be proven in the courts of law as it is something which the entire country has seen on the television.

"There was a time when the mention of Devbhoomi evoked sacred feelings but it is no longer so.

"Now, the mention of the word brings to mind images of a tainted government. The entire country has seen it all on TV.

"Won't you vote out a government which sullied the reputation of the abode of God," the Prime Minister said.

Asserting that he had taken up the task of translating Vajpayee's vision of Uttarakhand into a reality, he asked urged them to install a BJP government which restores Uttarakhand's honour.

Talking about demonetisation, Modi said some people are still not able to sleep and are very upset because all their black money business is now accounted in banks.

"From where did it come, how much came and who brought it and how, all that is before cameras now. That is why such people are sleepless now," he said.

"This country has been looted for 70 years. Can anyone deny this? Has it been looted or not. Whatever position one got, they worked hard to secure it and looted. They were in the habit of looting and black marketing.

"I have launched this crusade against corruption and black money. All that they have looted from the poor, I have to return it to them," he said.