Wife of BSF jawan in food row says he is missing

Sharmila has sought a high-level enquiry into his disappearance as well as the recent rejection of his plea for voluntary retirement. 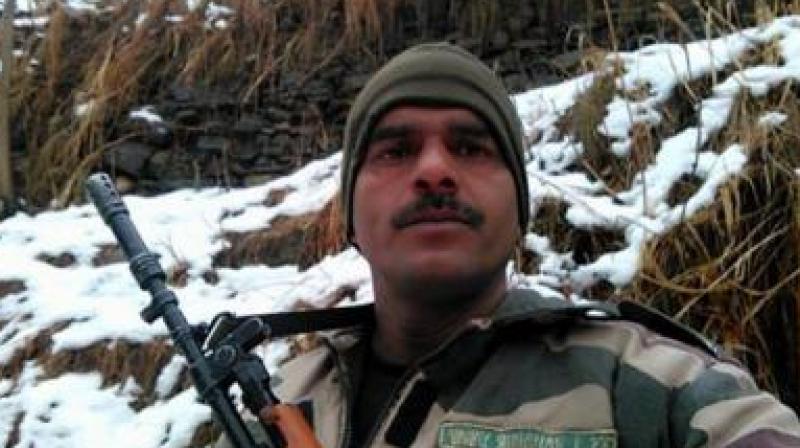 New Delhi: In a new twist in the case of the BSF jawan whose video on food quality went viral, his wife has filed a habeas corpus plea in the Delhi high court claiming that her husband is untraceable and the family has been unable to contact him for the last three days.

BSF jawan Tej Bahadur Yadav had on January 9 posted a video on Facebook which showed a meal box comprising a watery soup-like dal, which he said had only turmeric and salt and a burnt chapatti.

He had said this is what jawans were served at mealtime on duty at places, including the Line of Control (LoC) with Pakistan, and that jawans often went to bed on an empty stomach.

Pursuant to the video going viral on the social media, the Prime Minister’s Office had sought a detailed factual report on it from the Union home ministry and BSF.

A PIL was also filed in the Delhi high court seeking a direction to the government to depute higher officers to supervise cooking of proper healthy food and its distribution. It sought a status report regarding the quality of food served to soldiers along the LoC.

The high court had issued notice on the petition to various paramilitary forces, including the BSF, seeking their stand on the allegation of poor quality food being served to the troops.

It had also directed BSF to produce before it the investigation report and the steps taken with regard to the allegations levelled by the BSF jawan.

Now less than a month after the PIL was filed, Tej Bahadur’s wife, Sharmila, and his family are claiming that the soldier is untraceable and that they have not been able to reach him.

She has sought a high-level enquiry into his disappearance as well as the recent rejection of his plea for voluntary retirement.

When contacted, Ex-paramilitary Personnel Welfare Association general secretary Ranbir Singh said that he, along with Sharmila and her elder brother, had met the BSF director general who had assured them that a “fair inquiry as per procedure” will be conducted in the case.

Mr Singh also said that the BSF DG told them that the jawan was hospitalised.

Earlier, BSF had said that Yadav’s plea under the Voluntary Retirement Scheme (VRS) was cancelled as a Court of Inquiry (CoI) was pending against him.