The board emphasised basic level of Shariah that land dedicated for Masjid cannot be sold, gifted or alienated. 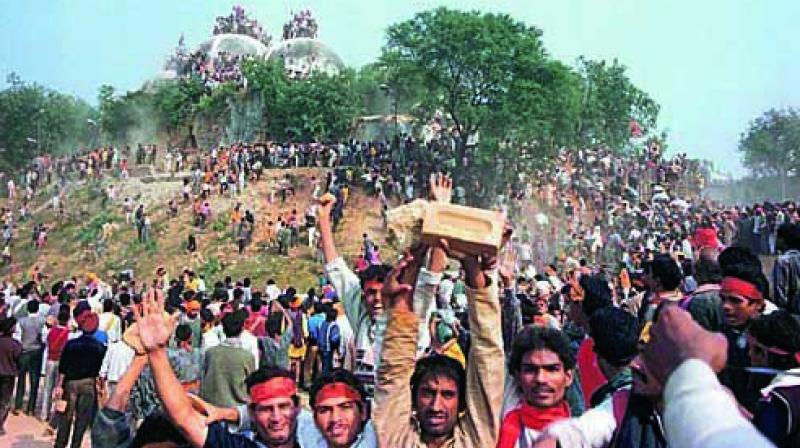 The Board said it will abide by the Supreme Court's decision in the matter. (Photo: PTI)

Hyderabad: The All India Muslim Personal Law Board has reiterated its earlier stand on the Babri Masjid issue and said that the mosque cannot be given to anyone.

The announcement was made during the 26th AIMPLB plenary meet being held in Hyderabad. The board arrived at a consequences during the marathon working committee meeting held on Friday evening. The meeting was chaired by AIMPLB president Maulana Rabba Hassani Nadvi.

“The Board reiterates its resolution dated December 1990 and January 1993 and once again emphasises the basic level of Shariah. The land dedicated for Masjid cannot be sold, gifted or in any way alienated. If once dedicated, its vests in Allah,” said Maulana Umrain Mehfooz Rahmani, secretary Muslim Personal Law Board on Friday evening.

Maulana Salman Nadvi, met Art of Living founder Sri Sri Ravi Shankar and extended support for construction of the Ram temple at the disputed site in Ayodhya. He said that an alternate piece of land should be offered for the construction of a mosque. He also added that a university can also be built at that place.

The board reportedly decided to constitute a committee that will probe the Maulana Nadvi's statement and recommend what actions can be initiated against him for speaking against the Board's stand.

It is learnt heated discussions took place during the working committee meeting held till late on Friday night on the move of Maulana Salman Nadvi.

The AIMPLB said that whenever Hindu groups have asked for negotiations, the board was open provided they come out with an acceptable formula. However, Hindu groups have always wanted Muslims to withdraw from the rights over Babri Masjid.

The case being heard in the court is a case of title but not the religious beliefs, said Maulana Umrain Mehfooz who read out the press statement of the board.

“All attempts to negotiate the settlement in past have been unfruitful and there is no proposal offering settlement without sacrificing, basic tenet has ever been put before the board,” he said.

Maulana Umrain said that the case is being heard in the Supreme Court. “The decision of the court will be respected by us. We hope the judgment will be in our favour.”

Any outcome of the court would not be considered either as win or defeat of any party but it would be the victory of justice, he said.

Member of Parliament and personal law board Asaduddin Owaisi read out the statement and said that the board will discuss the issue later in the coming days over the issue of Babri Mosque and other contentious issues related to Triple Talaq.

A 2010 verdict of the Lucknow bench of the Allahabad High Court, in a 2:1 majority ruling, had ordered the disputed land be partitioned equally among three parties -- the Sunni Waqf Board, the Nirmohi Akhara and Ram Lalla.