The terrorists breached the rear side of the Sunjwan Army camp near Chenni in the outskirts of the city during the intervening night. 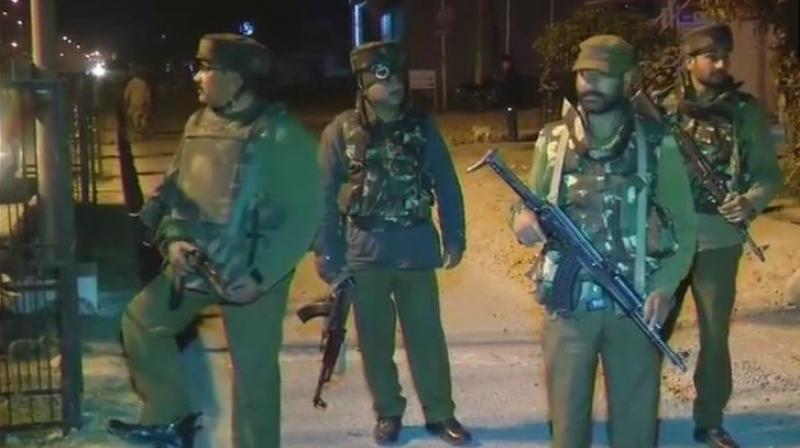 Intelligence inputs had warned an attack on the Army or security establishment by Jaish-e-Mohammed in view of the death anniversary of the 2001 Parliament attack convict Afzal Guru. (Photo: Twitter/ANI)

The minister informed the Jammu and Kashmir Assembly that Subedar Maganlal and Subedar Mohammed Ashraf were killed in the attack by a group of militants.

While the minister did not specify the group affiliation of the militants who launched the attack, officials said Jaish-e-Mohammed militants were behind the terror strike.

Former chief minister of Jammu and Kashmir Farooq Abdullah said, "No day passes by without such incidents and terrorists are all coming from Pakistan. If Pakistan wants good relations with India they need to stop terrorism or it will have bad consequences. Sadly, I have to say if it continues India won't stop itself from waging war."

DGP SP Vaid said the terrorists entered from the rear side of Sunjwan Army camp where family quarters are located.

The militants have been isolated, they said.

IGP SD Singh Jamwal told reporters here that "around 4:55 am suspicious movement was noticed by the sentry and his bunker was fired upon. The fire was retaliated. The number of militants isn't known. They've been cornered in one of the family quarters."

Security forces and police have cordoned off the area around the Sunjwan Army camp.The camp falls under the first Jammu and Kashmir Light Infantry in 36 Brigade.

Soon after the attack, reinforcements of the Army's special forces and SOG rushed to the spot and cordoned off the whole area amid a fierce gunfight, security official said.

Schools in the entire area around the camp have been closed by authorities as a precautionary measure.

A high alert has been sounded in Jammu and security beefed up in and around the city.

Intelligence inputs had warned of an attack on the Army or security establishment by Jaish-e-Mohammed in view of the death anniversary of the 2001 Parliament attack convict Afzal Guru who was hanged on February 9,
2013.

Union Home Minister Rajnath Singh spoke to the chief of the Jammu and Kashmir Police and took stock of the situation arising out of the terror attack on the Army camp in Jammu.

During the telephonic conversation, the home minister sought details from Director General of Police SP Vaid on the terrorist attack on the Army camp in Jammu, according to a tweet by the Home Minister's Office.