Similar action was taken against protesting groups of youth in Srinagar. 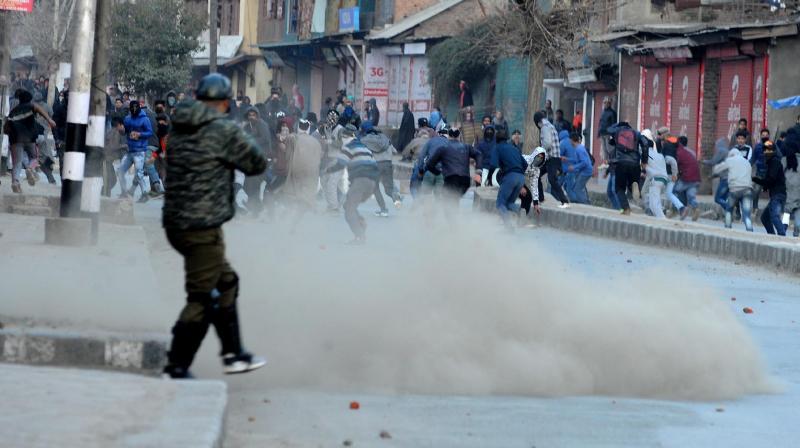 SRINAGAR: Security forces on Thursday enforced a lockdown in parts of Jammu and Kashmir’s summer capital Srinagar and in north-western town of Sopore to hold back protests planned on the death anniversary of Parliament attack convict Muhammad Afzal Guru.

However, clashes between irate crowds of youth and the security forces enforcing the restrictions under Section 144 CrPC erupted in Sopore as well as at a couple of places in central Srinagar. The security forces fired teargas canisters to push the stone-pelting mobs BACK into dark alleys of Sopore, witnesses said. Similar action was taken against protesting groups of youth in Srinagar.

Guru, a resident of Doabgah suburb of Sopore, was hanged to death in Delhi’s Tihar jail on February 9, 2013.

Elsewhere in the Valley, a shutdown called by ‘Joint Resistance Leadership (JRL)’, an alliance of key separatist leaders, disrupted normal life as shops and other businesses remained closed and only private vehicles and auto-rickshaws could be seen plying on select roads except in those areas where security restrictions were in force.

Two of the alliance leaders Syed Ali Geelani and Mirwaiz Umer Farooq continue to remain under house arrest while Muhammad Yasin Malik has been lodged in the Srinagar Central Jail after he was arrested by the police earlier during the week.