For many decades, Raja Reddy’s Shiva’s Dance was a showstopper across the globe. 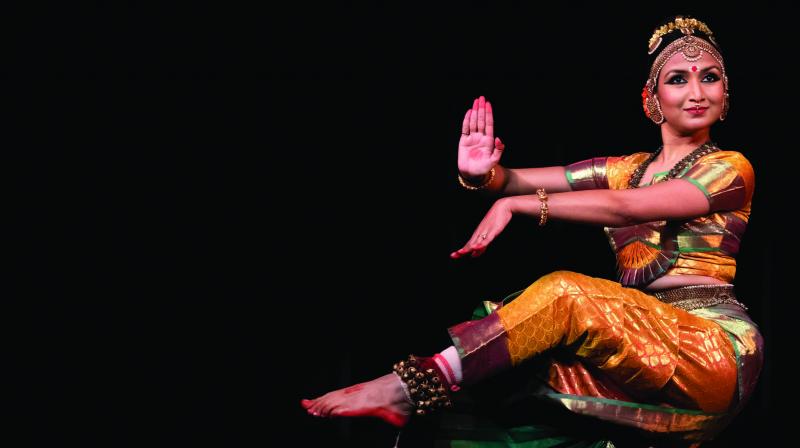 A legendary musician was asked the formula for success as a performing artist He replied, “Talent, an excellent guru, and luck.” Bhavana Reddy has enough talent and a guru (or I should say gurus) that are not only excellent but also her own world-famous father and mother. She really hasn’t needed luck in the equation given that her discipline and passion for dance have been honed to perfection over a performance career of over 20 years which is actually most of her young life. Now dividing her time between California and India,  just this past December 2019, Bhavana choreographed and performed Kuchipudi for a Los Angeles Philharmonic Orchestra  production of “Rite Of Spring”.

Her recent Kuchipudi performance at Kamani Auditorium, New Delhi, was woven around the cosmic theme of Shiva, exploring multiple dimensions and simply entitled Om Shiva. Bhavana’s opening ashtamoothy in Raag Ahir Bhairavi aptly begins with creation of the universe and specifically the eight entities of Water, Fire, Performer (of Yajna), Sun, Moon, Sky, Earth and Wind in whose forms the Shiva manifests himself.  Predicated on the cosmic soul as truly the whole universe and therefore the source of all creation, Bhavana beautifully and literally set the stage for the evening.

For many decades, Raja Reddy’s Shiva’s Dance was a showstopper across the globe. Dramatic poses demanding agility and fine balance in showing the activities and aspects of Nataraj, Lord of the Dance, were followed by a clear and simple navarasa of Shiva expressing the nine sentiments. It was quite ambitious of Bhavana to attempt her father’s signature item and she pulled it off with aplomb.

I have been impressed by Bhavana’s abhinaya range over the years, from the most comic characters to the most villainous. She nimbly switches from Shiva to Parvati, Tandav to Lasya.  Many classical dancers portraying masculine characters actually indicate rather than embody the character, requiring a huge suspension of belief from the audience.  Bhavana gave us Shiva, in the Reddy Kuchipudi mould, and I’m sure it can become one of her signature pieces from now on.

We are most accustomed to Radha’s sakhi being asked to bring Krishna to her from the Vaisnava ashtapadis of Geeta Govinda, so it was a lovely change to see Bhavana's Padavarnam Swamini Rammanavey Sarasakshiro with the nayika asking her sakhi to bring her lord Samaganalolodu, Lord Shiva.  Her bhava brought to mind the exquisite abhinaya of Radha Reddy of yesteryears.

In keeping with the theme of the evening, the rhythmic patterns danced on a brass plate was presented as a Shiva Tarangam beginning with Shiva, Shiva, Shiva, Bhava, Bhava Saranam written by Narayana Teertha.