In Uttarakhand, its a race against time 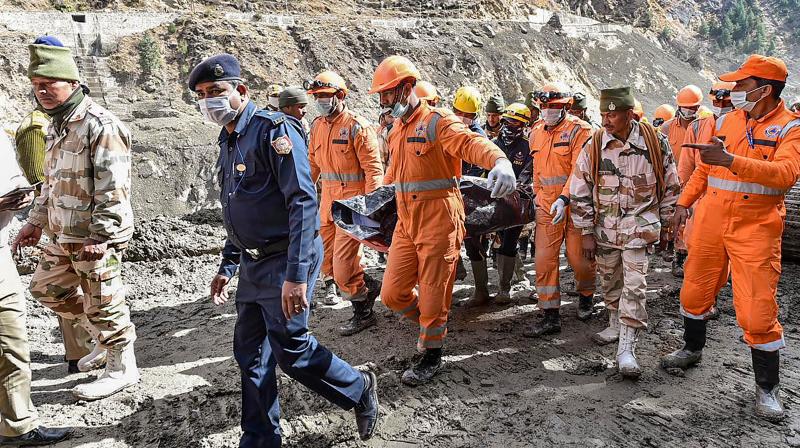 NDRF personnel carry the body of a victim who died in the massive floods caused after a glacier broke off in Joshimath in the Dhauli Ganga river, near Raini village in Chamoli district of Uttarakhand, Tuesday, February 9, 2021. (PTI/Arun Sharma)

New Delhi/Dehradun: The death toll in Uttarakhand’s glacier burst tragedy went up to 32 by Tuesday evening as the security agencies and others raced against time to pull out more people from the slush and two blocked tunnels where at least 30 construction workers are believed to be still trapped. The ITBP has deployed drones and dogs to detect over 170 people missing since the disaster struck the Chamoli region Sunday.

“A joint team of the ITBP, NDRF, SDRF and other agencies conducting rescue operations used drone cameras to see feasibility to enter beyond the cleared site inside Tapovan tunnel. They have not been successful so far. Machines have been deployed to clear slush,” an ITBP official said.

About 600 rescue workers are involved in the operation, two days after the sudden flood in the Alakananda river system in Chamoli district that was possibly triggered by an avalanche or glacier burst. Rescued workers were found hanging to ropes and iron bars in the ceiling of a tunnel in Tapovan to escape from icy water and slush. Those rescued were given medical treatment and airlifted to Dehradun.

Union home minister Amit Shah told the Rajya Sabha on Tuesday that rescue operations were continuing on a war footing and the Central and state governments were closely monitoring the situation.

“450 jawans of ITBP, five teams of NDRF, eight teams of Indian Army, a Navy team and five IAF helicopters are engaged in search and rescue operations," Mr Shah said, as Rajya Sabha members paid tribute to the victims of the Uttarakhand glacier disaster.

He added 12 people of an NTPC project were safely rescued from one tunnel, and 15 people from the Rishiganga project were also rescued at the time of the incident. “25-35 people are feared trapped in the second tunnel of the NTPC project, and efforts are underway on a war footing to rescue them,” Mr Shah said in the Lok Sabha.

He further said since a bridge was washed away due to the deluge, 13 villages around the site of the incident have been cut off. Supplies and medical assistance were being sent to these villages through helicopters.

Earlier on Tuesday, Uttarakhand CM Trivendra Singh Rawat conducted an aerial survey of the areas affected by the glacier burst and took stock of the situation. The CM visited the ITBP hospital in Joshimath, about 300 km from Dehradun, and met the 12 workers who were rescued from a small tunnel in Tapovan on Sunday evening. He also visited Lata and Raini to meet residents of the disaster-hit villages.

Mr Rawat said that the priority was to get to those trapped inside the tunnel and save as many lives as possible, he said. More heavy machines could be pressed into service to expedite the process of clearing the tonnes of debris inside the tunnel, blocking the path of rescue personnel.

A senior official added that the rescuers have so far not been able to make any contact with those stuck inside the tunnel but are hopeful about finding some “signs of life”.

As the temperatures dipped to freezing levels at the site, awash with slush, silt and debris, bonfires were lit at multiple locations to keep the rescuers warm. The rescuers are carrying tall wooden planks which are being used to wade in through the slush and will later also help create a platform to pull out the trapped people using ropes.

In New Delhi, meanwhile, scientists of the Wadia Institute of Himalayan Geology suggest that a rock mass may have weakened over a period of time due to the freezing and thawing of snow and led to the creation of a “weak zone”, triggering its collapse, which resulted in the formation of a temporary dam that eventually breached, causing the deadly floods in Uttarakhand’s Chamoli district on Sunday.

Kalachand Sain, director of the institute, said the incident occurred adjacent to the Raunthi glacier. The area also has glaciers that feed the Rishi Ganga river, which ultimately joins the Dhauli Ganga.