New Delhi: In a landmark and progressive judgment, the Supreme Court on Friday held that ‘right to die with dignity’ is part of right to life, a fundamental right under Article 21 of the Constitution, and allowed “living will” where, an ailing adult in his conscious mind, is permitted to refuse medical treatment or voluntarily decide not to take medical treatment to embrace death in a natural way.

A person in persistent vegetative state (PVS) can execute an “advance medical directive” or a “living will” to refuse medical treatment, the court said, laying down safeguards to prevent misuse of the provision to stop medical treatment of a terminally ill patient who reach a point of no return.

In a 538-page historic verdict, a five-judge bench, headed by Chief Justice Dipak Misra, said, “The right to privacy protects autonomy in making decisions related to the intimate domain of death as well as bodily integrity. Recognition of the right to accept or refuse medical treatment is founded upon autonomy.”

“The directive and guidelines shall remain in force till Parliament brings a legislation in the field,” CJI Misra said.

The bench, which also included Justices A.K. Sikri, A.M. Kanwilkar, D.Y. Chandrachud and Ashok Bhushan, gave the decision on a petition filed by NGO Common Cause in 2005 seeking a declaration that “right to die” is part of right to life under Article 21 of the Constitution.

“The right of a dying man to die with dignity when life is ebbing out, and in the case of a terminally-ill patient or a person in PVS, where there is no hope of recovery, accelerating the process of death for reducing the period of suffering constitutes a right to live with dignity,” the court said. 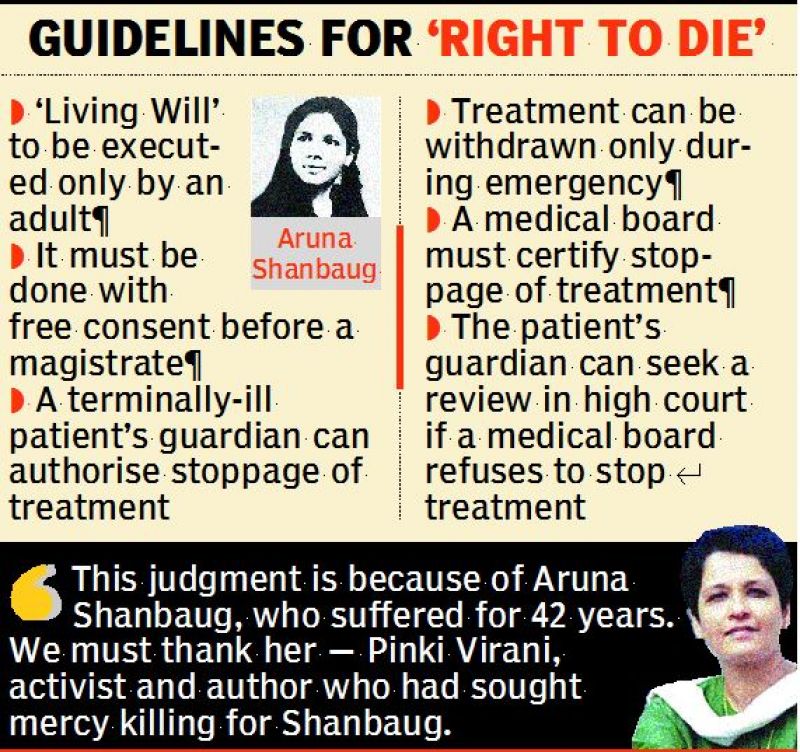 In a “living will” a person can express his/her desire in advance in writing to have or not to have extraordinary life prolonging measures to keep him/her alive even though there is no chance of recovery from his/her terminal condition. Under passive euthanasia medical treatment is denied to a person who cannot be cured. The court has recognised both the concepts.

The CJI, writing the judgment for himself and Justice Kanwilkar, said, “Dignity in death has a sense of realism that permeates the right to life. It has a basic connect with the autonomy of the individual and the right to self-determination. Loss of control over the body and the mind are portents of the deprivation of liberty.”

“As the end of life approaches, a loss of control over human faculties denudes life of its meaning. Terminal illness hastens the loss of faculties. Control over essential decisions about how an individual should be treated at the end of life is, hence, an essential attribute of the right to life.”

The court said that a person’s advance directive or “living will” to withdraw medical care to allow him to die with dignity will take effect only when a medical board affirms that his/her condition is beyond cure and irreversible.

The CJI pointed out that a certificate from a statutory medical board that a patient’s condition was beyond cure and irreversible would take care of apprehensions of relatives and doctors about withdrawing life support and when it should be done. The medical board will take the decision on the touchstone of modern technology.

The CJI said a family may not desire to go ahead with the process of treatment but is compelled to do so under social pressure especially in a different milieu, and in the case of an individual, there remains a fear of being branded that he/she, in spite of being able to provide the necessary treatment to the patient, has chosen not to do so.

The court noted that the possibility of misuse cannot be held to be a valid ground for rejecting advance directive, as opined by the Law Commission of India. Instead, an attempt can be made to provide safeguards for exercise of such advance directive.