India said it is waiting for action by Pak to bring those involved in 2008 Mumbai attack, 2016 Pathankot, Uri attacks to justice. 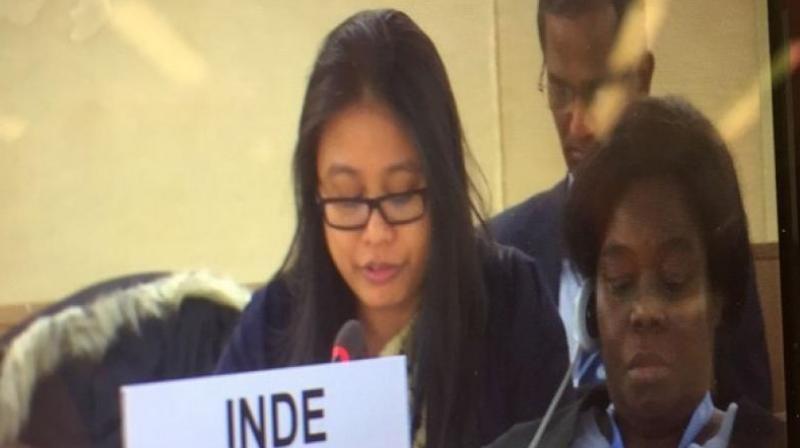 New Delhi/Geneva: India lambasted “failed state” Pakistan for trying to drag in the Kashmir issue at the United Nations for a second day in a row. On the first day of the 37th session of UN human rights council (UNHRC), Pakistan had argued about a plebiscite in Jammu and Kashmir, and a day later, on Friday, it tried to raise the issue again.

Demolishing Pakistan's arguments, India presented a long list of transgressions that Pakistan has refused to accept, from Osama Bin Laden found hiding on its soil to harbouring the United Nation-designated terrorists as well as accused in the Mumbai attacks roaming freely in the country.

She further added, "The world does not need lessons on democracy and human rights from a country whose own situation is charitably described as a failed state.”

"Even as terrorists thrive in Pakistan and roam its streets with impunity, we have heard it lecture about the protection of human rights in India," she said.

India said it is waiting for "credible action by the government of Pakistan to bring all those involved in the 2008 Mumbai attack and the 2016 Pathankot and Uri attacks to justice."

Mini Devi Kumam was responding to Tahir Andrabi, Pakistan's UN Deputy Permanent Representative in Geneva, who on Friday alluded to former Prime Minister Jawaharlal Nehru to make his case for a plebiscite in Kashmir.

The Pakistani diplomat said that at the heart of the Kashmir problem is the right to self-determination, which he claimed was mentioned by "the first Prime Minister of India, one of the founding fathers of India" and by the UN Security Council.

Pakistan has often referred to UN Security Council resolutions on Jammu and Kashmir to push its agenda.

"However, it (Pakistan) very conveniently forgets its own obligation under these resolutions to first vacate the illegal occupation of Pakistan-occupied Kashmir. It has also blatantly disregarded its other commitments... they continue to support cross-border terrorism in India," said Kumam.

Former prime minister Indira Gandhi and former Pakistani President Zulfikar Ali Bhutto had agreed in the Simla Agreement of 1972 that the two countries would look at the Kashmir issue as a bilateral matter, which cannot call for the involvement of a third party for negotiations.

"It is extraordinary that the state which protected Osama Bin Laden and sheltered Mullah Omar should have the gumption to play the victim," said Kumam.

“The World does not need lessons on democracy and human rights from a country whose own situation is charitably described as a failed state," Kumam added.

Kumam also demanded that Pakistan should end forced conversions and marriages of minorities; including Hindu, Sikh and Christian women, and prosecute all such cases.

"We urge the Council to call on Pakistan to stop targeting political dissidents and legitimate criticism in Sindh, Baluchistan and Khyber Pakhtunkhwa and to stop torture, enforced disappearances and unlawful killing, including that of journalists and activists by its security agencies. Pakistan should also prosecute all perpetrators of such crimes," Kumam said.

India also demanded the end of sectarian violence, systemic persecution and attacks on Muslim minorities, such as Shia, Ahmadiyas, Ismailia and Hazaras in Pakistan.