The aircraft landed at Hindon airbase in Ghaziabad, from where the passengers were taken to a medical facility 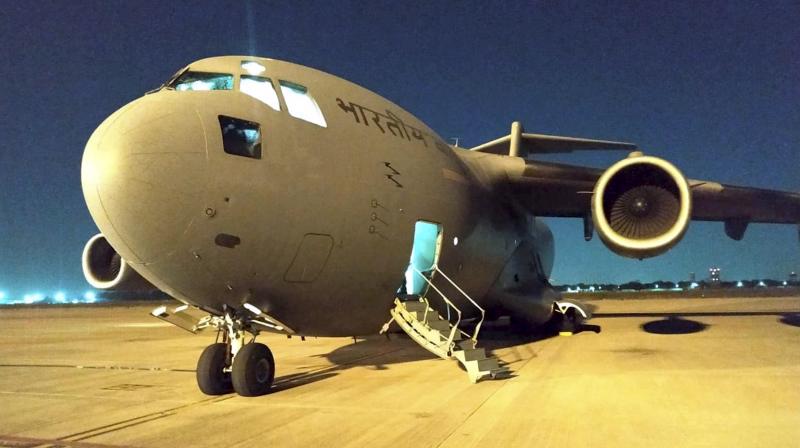 A C-17 Globemaster aircraft of the Indian Air Force before their departure from Hindan airbase for Tehran to airlift Indian citizens, in Hindan. PTI photo

The aircraft, a C-17 Globemaster, was sent to Tehran on Monday evening.

About 2,000 Indians are living in Iran, a country that has witnessed increasing numbers of coronavirus cases in the last few days.

“The IAF aircraft has landed. Mission completed. On to the next,” External Affairs Minister S Jaishankar tweeted.

In an earlier tweet, he said, “First batch of 58 Indian pilgrims being brought back from Iran. IAF C-17 taken off from Tehran and expected to land soon in Hindon.”

“Thanks to the efforts of our Embassy @India_in_Iran and Indian medical team there, operating under challenging conditions. Thank you @IAF_MCC. Appreciate cooperation of Iranian authorities. We are working on the return of other Indians stranded there (sic),” Jaishankar added.

The aircraft landed at Hindon airbase in Ghaziabad, from where the passengers were taken to a medical facility.

According to latest reports, 237 people have died of novel coronavirus in Iran while the number of positive cases stands at around 7,000.

It is the second such evacuation by the C-17 Globemaster in the last two weeks.

On February 27, 76 Indians and 36 foreign nationals were brought back from the Chinese city of Wuhan by the aircraft of the Indian Air Force.

The C-17 Globemaster is the largest military aircraft in the IAF's inventory. The plane can carry large combat equipment, troops and humanitarian aid across long distances in all weather conditions.

Four days ago, a Mahan airline plane brought swab samples of 300 Indians from Iran to India.