Jaishankar in Srinagar, meets families of Indian students in Iran 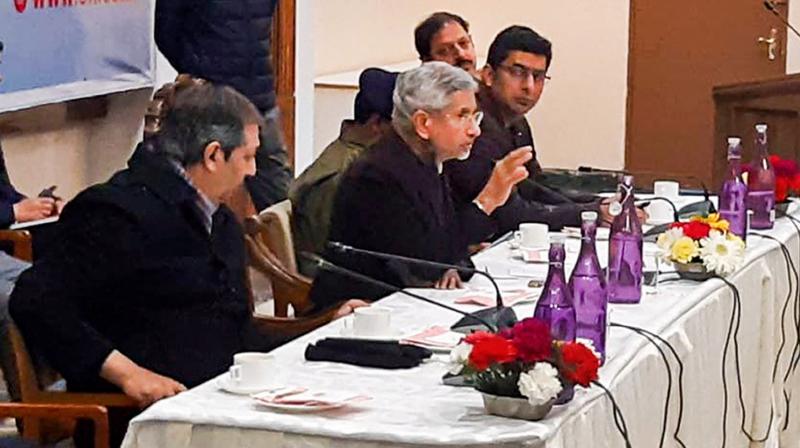 Srinagar: External affairs minister, S. Jaishankar, on Monday arrived in Srinagar on a surprise visit to Kashmir Valley. The officials, however, said that the visit was primarily aimed at interacting with the families of Kashmiri students and pilgrims stranded in Iran.

Srinagar’s DC Shahid Iqbal Choudhary told this newspaper that the J&K government prepared a list of more than 400 local students currently studying in various universities and colleges in Iran where the Coronavirus cases have increased over the past couple of weeks, giving sleepless nights to their families back home. “This list was shared with the Government of India with a request that necessary arrangements may be made for the return of these students and pilgrims stuck in Iran,” he said.

He added that Mr. Jaishankar chose to visit Srinagar himself to interact with the families of these students and pilgrims to assure them that efforts are underway for their return from Iran.

The official sources here said that External Affairs Minister flew into J&K’s summer capital almost quietly. He then held interaction with the families of the students and other locals stuck in Iran at Kashmir Convention Centre on the banks of Dal Lake.

Though reporters were denied entry into the venue, the official sources later said that Mr. Jaishakanker told a group of 25 families whose wards are in Iran that the priority of the Government of India is to fly home the pilgrims who are changing their residences in Iran and lack adequate facilities. As far the students, he said that to bring them back was the government’s second priority for they are, unlike pilgrims, better placed in their respective campuses.

The sources said that the relatives of those stranded in Iran including students and Shia pilgrims from the Valley presently in holy city of Qom, about 140 km to the south of Tehran, demanded that the Centre airlifts them from Iran immediately.

Mr. Jaishankar later tweeted “Met in #Srinagar the families of Indian students in #Iran. Assured them that our Embassy @India_in_Iran is monitoring their welfare. We are committed to facilitating their early return to India.”

During his brief stay in Srinagar, the Union minister also met the representatives of local hoteliers, tour and travel operators and houseboat owners. While talking about this meeting he wrote on micro-blogging site “Heard a clear message from them that they were ready for the forthcoming tourist season. Promised them that government would strongly support tourism promotion efforts, domestically and internationally.”

Later, he visited the passport office along City Boulevard and “appreciated the good work and enthusiastic approach of its personnel.” He also went to north-western town of Baramulla where besides interacting with local people, he e-inaugurated several projects. He tweeted, “Heard from a broad cross-section about their strong expectations of change and development progress...confident that their faith in a better future will be realised.”

Meanwhile, the authorities here said the about 250 people from the Valley have returned home from Iran and China but none of them has reported with any visible signs of COVID-19 infection. The Deputy Commissioner of central district of Budgam Tariq Hussain Ganai said that 41 local residents who arrived from Iran and China recently will be quarantined at 76-bed facilities established at nine isolation locations in the district.

He, however, also said that most of the suspects, who were admitted in quarantine isolation wards earlier, have tested negative with no symptoms of the infection on completing 28 days.

The officials said that five groups comprising 160 pilgrims from Budgam, expected to return home from various countries including Iran, will also be quarantined whereas students who are returning from that country and China will be taken to isolation wards for a proper check-up.

His counterpart in Srinagar, Mr. Choudhary in a message said, “People who returned to Srinagar from Iran, Italy or Republic of Korea, since February 21, please contact our helpline No. 9419028251 for your own safety and that of others around you.” The J&K’s health department tweeted “Any passengers with travel history to COVID-19 affected countries be reported to health authorities. Help us to help you.”

The authorities said that, so far, three confirmed cases of COVID-19 have been reported from Ladakh and Jammu whereas they are awaiting the test results of the fourth probable patient whose samples have been sent for re-test.

A woman resident whose test results have confirmed to be carrying the infection is admitted in Jammu’s government-run Medical College Hospital. A resident of Kargil, she lives in Jammu and had recently went to Iran along with her husband on pilgrimage, the officials said adding that a second patient’s sample is being sent for re-test.

The J&K government in a statement late Monday evening said that  till date 669 travellers and persons in contact with suspected cases have been put under surveillance in the Union Territory- 460 of them in home quarantine including 20 at Jammu's Yatri Bhawan, 8 in hospital quarantine and 55 in home surveillance. It said that 146 people have completed their 28 days surveillance period whereas the samples of 55 others were sent for testing. "Of these, 26 have tested negative and one positive while 28 reports are awaited," it said.