The RSS chief suggested enactment of a nationwide law banning cow slaughter will take time due to the “complexities” of politics. 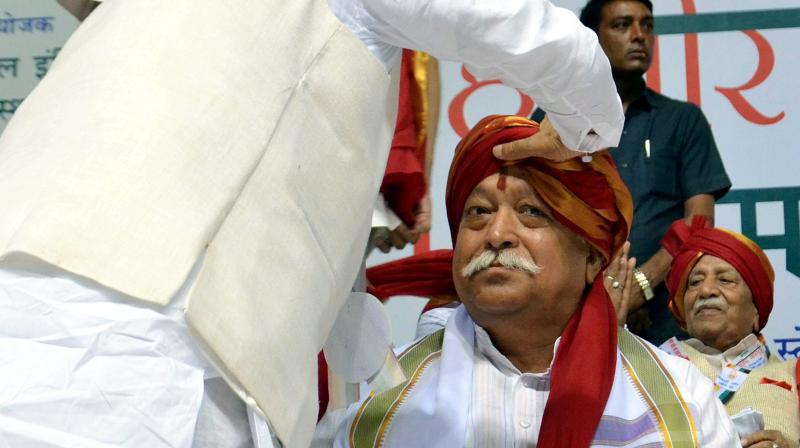 New Delhi: Calling for a total ban on cow slaughter across the country, RSS supremo Mohan Bhagwat on Sunday also condemned the violence unleashed by cow vigilantes, saying it only gave a bad name to the cow protection campaign. Mr Bhagwat’s remarks assume significance as the Narendra Modi government and the BJP are facing flak over the lynching of a 55-year-old man by cow vigilantes in BJP-ruled Rajasthan recently.

There is also a growing perception that cow vigilantism is rising since the Modi government came to power at the Centre in 2014 and with the BJP’s rising graph across the country. The ongoing Parliament session has also seen an uproar over the Alwar lynching incident, with the Opposition questioning Mr Modi’s silence over the issue. It may be recalled that the PM had severely criticised self-proclaimed cow vigilantes last year after attacks on dalits in Gujarat.

Addressing an event to mark the birth anniversary of Lord Mahavira, Mr Bhagwat said the Sangh Parivar was in favour of a total nationwide ban on cow slaughter, but observed that political “complexity” comes in the way of such a total ban. He described cow slaughter as a “nirgun” (vice) and said that it must be removed, but at the same time said cow protection should be promoted in such a way that it wins over more and more people to the cause and brings praise for those doing it. He said non-violence was an essential part of Mahavira’s teachings, which can unite a society comprising people of different faiths and behaviour.

The RSS chief suggested enactment of a nationwide law banning cow slaughter will take time due to the “complexities” of politics. “If there is a law, it will be for promoting non-violence, not violence,” he said. “There cannot be a law that says you do violence. It is impossible.”

Referring to Sangh pracharaks in the BJP, the RSS chief said many states where RSS functionaries had been in power have enacted such laws and expressed confidence that other governments would soon follow suit by dealing with local “complexities”. In some states, mostly in the Northeast, beef is consumed widely unlike in the northen states, many of which are now under BJP rule. The BJP has been expanding its base in the Northeast and has formed government in several states, including Assam, Arunachal Pradesh and recently in Manipur.

Mr Bhagwat said that as a veterinary doctor he is aware of a “desi” cow’s utility, including the usefulness of its urine and dung, and claimed that even scientific bodies had come to accept this.