The suspended teachers, Sheeja, Safeena, Bindu and Shahina, were on duty at the entry point to the exam hall for frisking candidates. 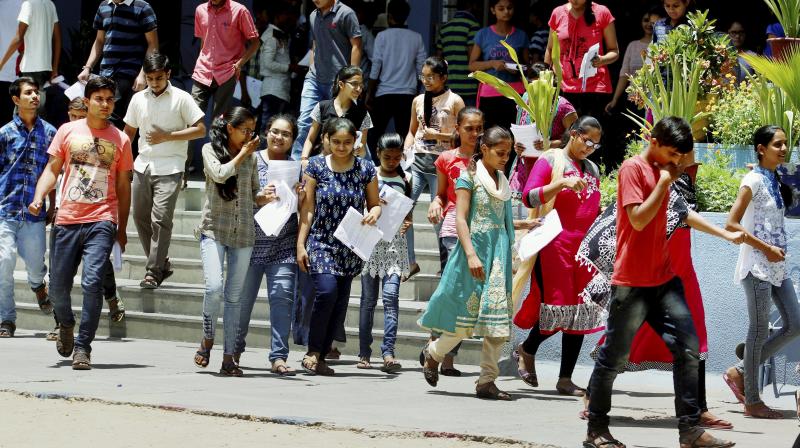 Students coming out of an examination centre after appearing in National Eligibility-Cum-Entrance Test (NEET) in Ahmedabad. (Photo: PTI/File)

Kannur: The management of TISK English Medium School at Kunhimangalam near Payyanur, accused of forcing candidates to remove innerwear with metal buckles during the NEET on Sunday, has suspended four teachers for a month pending inquiry.

The suspended teachers, Sheeja, Safeena, Bindu and Shahina, were on duty at the entry point to the exam hall for frisking candidates.

They were among the 24 teaching staff members from two schools under the same management appointed as exam invigilators.

The incident triggered outrage across the state, which also reverberated in the Assembly on Tuesday.

The Central Board of Secondary Education (CBSE), which conducts the nationwide test, also termed the incident as “unfortunate” and “consequence of overzealousness”.

It directed the school principal to apologise to the students, but justified frisking to prevent cheating “using high-end electronic gadgets such as miniaturised Bluetooth microphones, other sophisticated electronic communication devices and the possibility of impersonation.”

Till Monday, the school management was maintaining that no such incident happened on its campus and the staff acted on the NEET instructions.

“Whether it is outerwear or innerwear, if the metal detector identifies the presence of any metal in a student’s body, they are not allowed to get inside,” principal K. Jamaludeen had told DC.

However, after protests before the school, the management was forced to change its stand. The school management representatives were not available for a comment on Tuesday.

Meanwhile, a team of police officials from Kannur visited the home of the candidate, who alleged removal of her innerwear, at Cheruvathur and recorded her statement. Kannur district police chief has also submitted a report to the government.