A ‘wall of valour’ for our bravehearts in campuses

The Teen Murti was a memorial to honour personnel of the Indian Cavalry, who died in World War I. 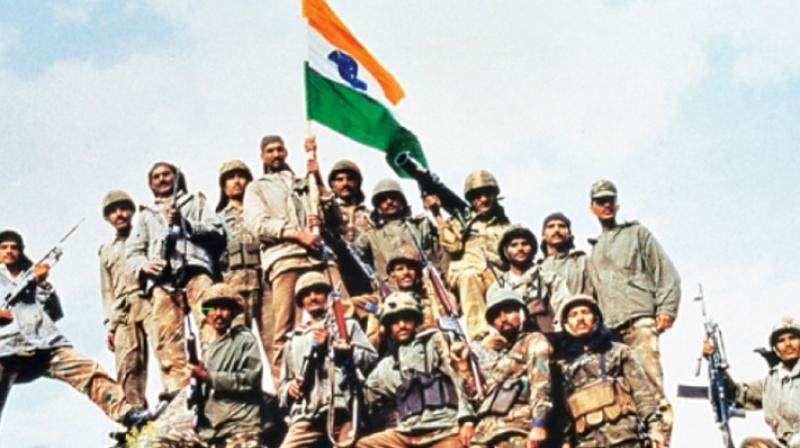 Inspired by Prime Minister Narendra Modi to help create consciousness about the nation’s real heroes and spread a spirit of respect for them, minister of human resources development Prakash Javadekar and minister of state for defence Subhash Bhamre jointly launched a campaign to institute a “wall of valour” in 1,000 educational institutions across the country.

The nationwide programme named “Vidya Veerta Abhiyan” involves adorning a wall 15x20 feet with these portraits at designated prominent places in educational campuses to inculcate a sense of national pride and patriotism among the students. The expenditure on constructing the wall, the display, etc., is proposed to be borne by voluntary contributions by the teaching faculty and the students of the educational institutions.

Addressing the gathering, Mr Javadekar said, “We feel secure just because of the continuous vigil and alertness of our armed forces along the borders.” He added that armed forces personnel are our real post-Independence heroes while the freedom fighters who laid down their lives and faced atrocities for the cause of freedom are heroes of that period.

Expressing appreciation for the display of portraits of 21 PVC awardees to instil the spirit of patriotism among youth of the nation, Dr Bhamre complimented troops for tirelessly braving enemy bullets in difficult terrain while away from their families for long periods and he expressed confidence of their professional capability.

Both ministers condemned the recent barbarism by the Pakistan Army and presented portraits of the gallant PVC heroes to vice-chancellors of various universities present, including Arunachal Pradesh and a representative from Indian Institute of Technology, Delhi.

Invited to speak on the occasion, both survivor PVCs Yadav and Kumar, had the audience spellbound and repeatedly clapping as they simply and stoically shared their experiences of exemplary acts of valour during the Kargil conflict. Referring to the recent brutality by the Pakistan Army, Sanjay Kumar explained the “soch me farak” (difference in attitudes) of Indian and Pakistani armies and reminded how during that confrontation our troops had given decent burials to enemy troops killed, which Pakistan then had refused to acknowledge or collect the bodies of.

This event again raises two questions: Why has India’s pre- and post-Independence history not been taught in schools and why has a war memorial not yet been constructed, despite Arun Jaitley announcing plans for it during his earlier stint  as defence minister?

India’s India Gate was made by the British as a tribute to 74,187 Indian soldiers, who were killed out of 1.5 million who participated in World War I. The Teen Murti was a memorial to honour personnel of the Indian Cavalry, who died in World War I. In World War II, 2.5 million Indian personnel were the decisive factor for allied victory, but the Brits left in too much of a hurry to make another war memorial. Indian troops have been paid impressive tributes by a number of allied countries for their role in both World War I and II, with citations of their gallantry well recorded in museums and memorials. The Indian government since Independence obviously had no time to even think about even one war memorial despite being responsible for ordering the armed forces to fight several wars and conflicts since then.

While the US entered both World War I and II late, it built imposing memorials and/or museums for both. There is also a memorial for US Marine Corps in World War II, as well as veterans memorials for those involved in Korea and Vietnam. And all of these are in Washington, D.C. The Arlington cemetery spread over 624 acres in Virginia, is as good as in Washington. There is a separate memorial for women soldiers. Visiting the Arlington National Cemetery is an emotional experience for not only soldiers but civilians too. And the crowds that come to visit national war memorials in the US are a testimony to the fact that no matter what the cause of deployment in any conflict even those publicly perceived as futile or unnecessary the respect that dead soldiers get is indeed wide and heartfelt. Visiting Washington, D.C. and the war memorials, this writer as an Indian, yet again felt utter disgust at how the Indian government since Independence has failed to inculcate national pride and how shabbily it has treated its armed forces.

It remains to be seen when the war memorial will come up, what all will be done to assuage the feelings of the next of kin of victims of the rogue-butcher Pakistan Army and how and when New Delhi will formulate and implement a consistent effective policy on dealing with Pakistan.