The Army Chief said they can’t allow civilians to disrupt their operations and help terrorists to escape. 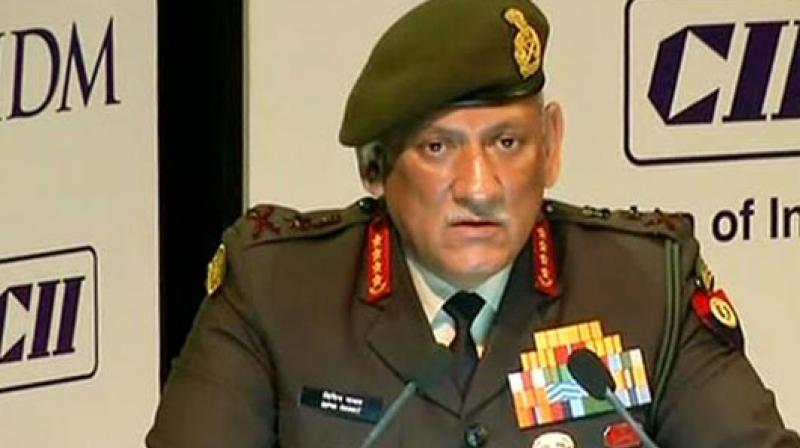 Army Chief Gen Bipin Rawat claimed that he believes the youth have gotten themselves in Pakistan’s traps. (Photo: File)

New Delhi: Expressing concerns over Kashmiri youth picking up the gun, Army Chief Gen Bipin Rawat said that the youth need to be told that Azadi will not happen and one cannot fight the Army.

In an interview to The Indian Express, Gen Rawat said, “I want to tell Kashmiri youth that Azadi isn’t possible. It won’t happen. Don’t get carried away unnecessarily. Why are you picking up weapons? We will always fight those who seek Azadi, those who want to secede. (Azadi) is not going to happen, never”.

Gen Rawat also said that though the Army don’t enjoy killing, it will give a befitting reply if the people want to fight with it.

“We don’t enjoy it. But if you want to fight us, then we will fight you with all our force. Kashmiris have to understand that the SFs (security forces) haven’t been so brutal — look at Syria and Pakistan. They use tanks and air power in similar situations. Our troops have been trying their level best to avoid any civilian casualty despite huge provocation,’’ he said. “I know that the youth are angry. But attacking security forces, throwing stones at us isn’t the way”.

The Army Chief also said that they can’t allow civilians to disrupt their operations and help terrorists to escape.

Stating that he understands there isn’t a military solution to the issue, the Army Chief said, “This is why we want politicians, political representatives to go into villages especially in South Kashmir to talk to people. But they are scared that they will be attacked,’’ he said. “It will happen once there is calm. And we are hopeful that people will soon realize that all this is futile and start thinking differently”.

Rawat also said he is ready to suspend military operation to avoid civilian casualties but questioned who will guarantee that the Army personnel, policemen and political workers won’t be attacked.

In a response to his support for Major Leetul Gogoi’s move to strap a Kashmiri man to a jeep as a human shield last year on polling day in Budgam, Gen Rawat said: “That was the only option other than to open fire at a mob that was pelting stones”.

“He (the Army officer) could have opened fire and killed people. Instead, he used the best available option with him in those given circumstances,’’ General Rawat said. “Besides, we were investigating the issue when an FIR was filed against him. My officer felt that he is being abandoned. I can’t let my officer feel that”, the Army Chief added.