As loudspeakers played famous songs and dialogues from the actor’s hit movies, he greeted people by waving and making a victory sign. 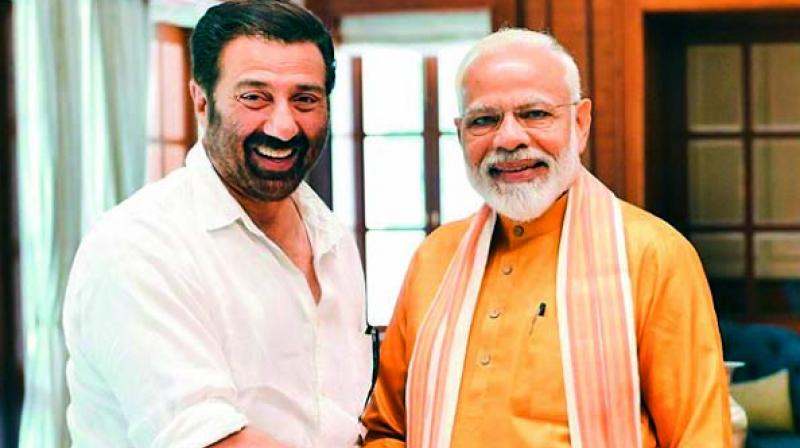 Chandigarh: The border constituency of Gurdaspur in Punjab is witnessing an interesting political battle with the entry of Bollywood star Sunny Deol as BJP candidate. The seat was considered quite safe for Punjab Congress president Sunil Jakhar who is a sitting MP. However, after the announcement of Sunny Deol as BJP candidate, the fight in Gurdaspur has become exciting even as the BJP does not have much of a foothold in Punjab.

The roadshow of actor-turned-politician Sunny Doel got a massive response from the people of the area. He started the roadshow after paying obeisance at Gurdwara Darbar Sahib and Darshan Asthan (for Gurdwara Kartarpur Sahib in Pakistan) at the border town of Dera Baba Nanak. People stood for hours on the roadsides, stairs, rooftops and other vantage points. As loudspeakers played famous songs and dialogues from the actor’s hit movies, he greeted people by waving at them and making a victory sign. Several youths even tried to climb on to his tucks to take selfies, though the police stopped them.

Many people outside Punjab do not know that Sunny Deol is very popular Bollywood star in Punjab, even as the film industry is dominated by the actors of Punjabi origin. Sunny Deol and his father Dharmendra remain the most popular stars in Punjab. Some other Bollywood stars are from the trading communities of Punjab, while Sunny Deol belongs to the Jat Sikh community, (land owning farming community) which is politically the most dominant community in Punjab. Addressing the farmers Sunny Doel evoked his roots “I am from Punjab and farming is in the blood of Punjab.”

To counter the charisma of Sunny Deol, the Congress has decided to bring in the party general secretary Priyanka Gandhi Vadra to campaign for the Gurdaspur candidate.

Though Sunil Jakhar won the seat with a record margin of 1.93 lakh votes in the October 2017 bypoll necessitated after death of actor Vinod Khanna, the ruling party is taking no chances. Khanna had won the seat four times and Gurdaspur is now enamoured of the Border hero.

Congress general secretary in-charge of Punjab Asha Kumari said Ms Priyanka would be campaigning in Punjab. “We have sought her dates for Gurdaspur.”

Congress candidate Sunil Jakhar, on the other hand, remains unfazed about the star status of his rival. “When Vinod Khanna was given the BJP ticket in 1998, locals actually wanted to see an actor in flesh and blood. Now with every household having a TV, the fascination to see a star is no longer there,” said the MP.