The Congress attaches no value to human lives lost in riots, Modi said. 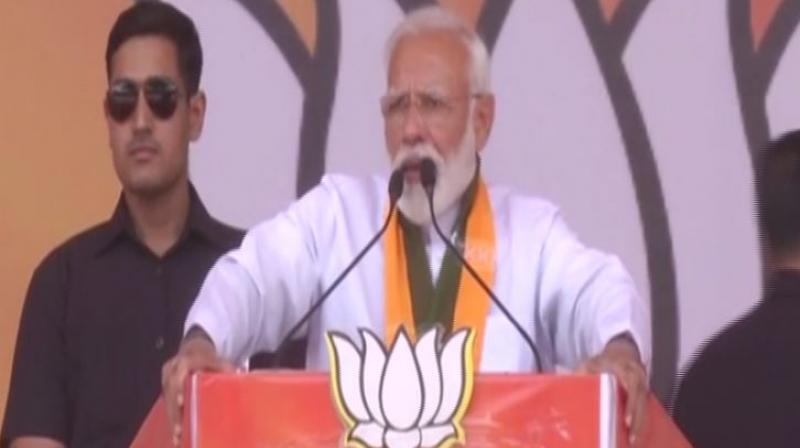 Hundreds of Sikhs were torched after throwing petrol diesel on them, burning tires were put around their necks and Congress is saying 'so what', PM Modi took a swipe at the Congress. (Photo: ANI)

Rohtak: Prime Minister Narendra Modi tore into the Congress on Friday over Sam Pitroda's "so what" remark on 1984 anti-Sikh riots. The Congress attaches no value to human lives lost in riots, Modi said with regard to the Overseas Congress chief's comment.

"Yesterday one of the biggest Congress leaders said, "so what if the 1984 riots happened".

This leader is one of the biggest confidantes of the Gandhi family, he was a close friend of Rajiv Gandhi and a guru for Rahul Gandhi. He attaches no value to the lives of people.

Hundreds of Sikhs were torched after throwing petrol diesel on them, burning tires were put around their necks and Congress is saying "so what"," PM Modi took a swipe at the Congress.

Thousands of Sikhs were thrown out of their houses and killed and their properties were destroyed, but Congress says "so what", Modi said at a campaign in Rohtak.

"In Haryana, Himachal Pradesh, Uttar Pradesh, and other states Sikhs were targeted under Congress. Every big and small leader of the Congress was a part of this crime, but today they are saying so what," he continued his tirade.
PM Modi Is not the only leader who had a bitter reaction to Pitroda's remark, his party men have strongly criticised the Congressman for his statement and demanded an apology from Rahul and Sonia Gandhi.

"What about 1984? You speak about what you have done in five years. It happened in 1984, so what? (1984 hua toh hua). What have you done? (Ab kya hai '84 ka? Aapne kya kiya 5 saal mein, uski baat kariye. '84 mein hua to hua. Aapne kya kiya?)" Pitroda said on being asked to respond on the BJP's claim citing the Nanavati commission report that the instructions for the violence had come from then prime minister, late Rajiv Gandhi's office.