India   All India  10 May 2019  India joins naval exercises by US, Philippines, Japan in South China Sea
India, All India 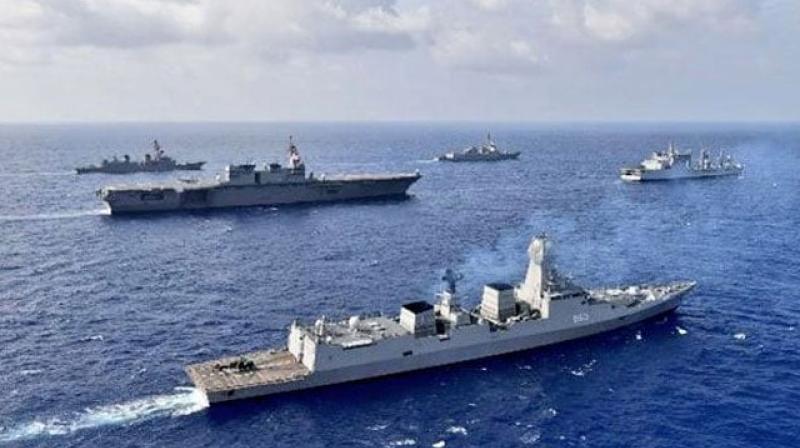 The six vessels gathered 'to train together and promote maritime cooperation throughout a free and open Indo-Pacific,' the Navy said in a statement. (Photo: Twitter I Indian Navy)

New Delhi/Washington: Indian Navy on Thursday participated with the navies of the US, the Philippines and Japan in their first joint naval exercise in the disputed South China Sea, where China is flexing its muscle.

The vessels included Indian destroyer INS Kolkata and tanker INS Shakti, a guided missile destroyer from the US Pacific Fleet, Japanese aircraft carrier Izumo and the Philippines patrol vessel Andres Bonifacio, the US Navy said in a statement.

"Professional engagements with our allies, partners and friends in the region are opportunities to build upon our existing, strong relationships, as well as learn from each other," Klug said.

The six vessels gathered "to train together and promote maritime cooperation throughout a free and open Indo-Pacific," the Navy said in the statement.

"Our bond of friendship with our regional partners is as strong as our commitment to maintain peace and stability in the region," Captain Jerry Y Garrido Jr., commanding officer, BRP Andres Bonifacio, said.

Meanwhile, the Indian Navy tweeted about the drills and posted pictures of the warships that participated in the six-day group sail.

"#IndianNavy ships Kolkata & Shakti carry out Group Sail with Naval ships of @JMSDF_PAO, Philippines & @USNavy in the South China Sea from 03 - 09 May 19. The six-day long Group Sail had participation of six combatants from the four participating countries," the Spokesperson of the Indian Navy tweeted.

The combined show of naval might comes at a time of heightened tensions in the trade war between China and the US - the two world powers locked in a tussle for the commercial control of South China Sea, which serves as a passage for annual trade worth USD 3.5 trillion.

China claims almost all of the strategic South China Sea with Brunei, Indonesia, Malaysia, the Philippines, Taiwan and Vietnam pushing competing claims to parts of the resource-rich maritime region. The United States, Japan and India do not have any territorial claims there.

Islands in the South China Sea - is an area which accounts for 12 per cent of global fishing and through which 30 per cent of the world's trade passes, apart from housing possible oil and gas reserve.