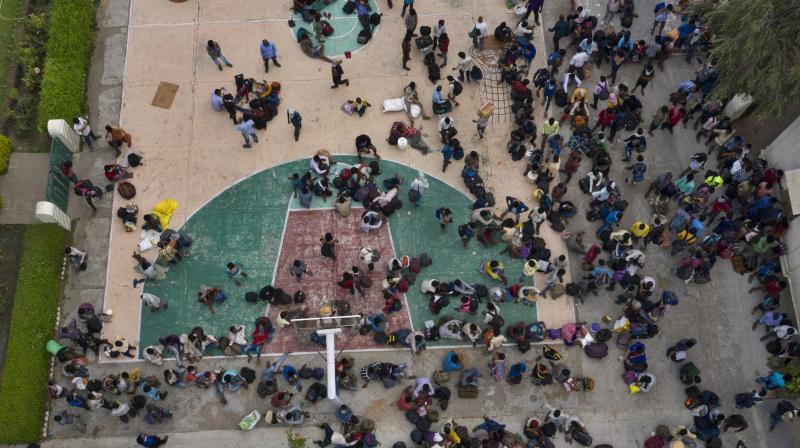 Migrant labourers returning from other states seen in Prayagraj on May 10, 2020. (AP)

As the deadly novel coronavirus continues to spread rapidly, the Centre is mulling a community-based mapping to identify hotspots across the country and “understand” the origin and pattern of the spread of the virus community-wise.

The “community mapping”, as some refer to it, appears to be aimed at getting a clearer picture of the approximate number of people belonging to different communities who have contracted the virus, have more chances of getting infected due to living in clusters and the likelihood of them spreading the virus to adjoining localities.

The Centre feels that a data bank of community-wise Covid-19 numbers will help its containment measures and in tackling future pandemics in the country.

Highly placed sources in New Delhi told The Asian Age that the idea for community-based mapping came up during the recent closed-door meetings at the highest level. Though officially no decision has been taken so far on whether or not to go ahead with the proposal, it is unclear if the exercise has already begun unofficially.

“In the near future, if coronavirus cases explode, like it happened in the US or other parts of the world, community-based mapping will tell us which community has more chances of spreading the virus further and, accordingly, strict containment measures can be taken in localities or clusters across the country,” sources, privy to discussions, said.

This move comes at a time when BJP leaders have openly blamed Muslims for the rising number of coronavirus cases in the country after Tablighi Jamaat in Delhi emerged as a super-spreader. Though there have been cases of other religious heads and congregations emerging as super-spreaders, including in Punjab, prejudice has been fanned against Muslims and they have been targeted. There have been several instances of Muslims being attacked, even denied medical care.

If undertaken, the mapping, sources said, will take into account the geography of the area or cluster, the lifestyle of people and their earnings, their social activities, their daily routines and the approximate number of members in the families.

“For all this to happen, state governments will have to cooperate. There is also some amount of scepticism as to how the people will receive this idea, if and when approved, as there are chances of this backfiring on the government,” sources said, adding that the government is aware of the criticism that could come its way. There is a perception in some quarters that state governments are not giving out the correct figures of Covid-19 cases.

The proposal to have a community-based mapping was mooted after citing the examples of Agra in Uttar Pradesh, some pockets in Gujarat, Maharashtra and Delhi which are witnessing increasing number of Covid-19 cases,

“There are several reports before the Centre which suggest that the virus is active among scores of people residing in colonies or clusters and they are sitting on a time bomb. It is here that, along with other inputs, coommunity-based mapping will come in handy for taking adequate containment measures. But that is only in a scenario when the number of cases shoot up,” another official said.

Sources said that this data bank will also come handy for tackling pandemics in the future. “Coronavirus has taught us a lesson and now is the time to prepare ourselves with enough data on the origin and pattern of the spread of the virus,” they added.