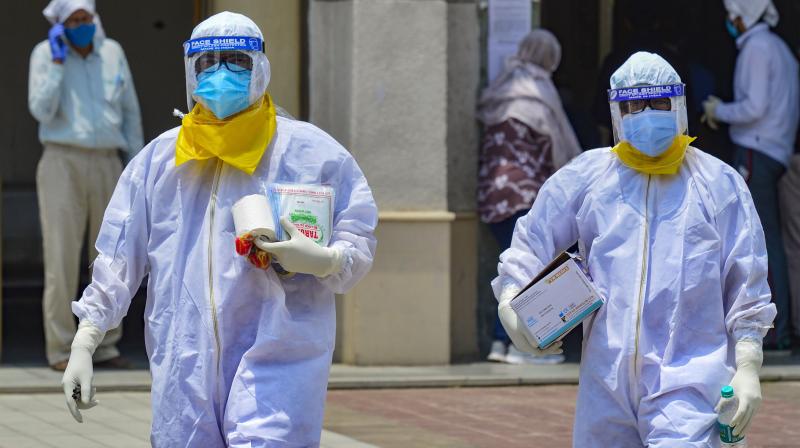 Medics take samples of suspected COVID-19 patients for lab test at a government hospital, during the ongoing nationwide lockdown to curb spread of coronavirus, in New Delhi. PTI photo

Delhi chief minister Arvind Kejriwal's coronavirus test has returned negative.
Delhi, that is witnessing a steep rise in novel coronavirus cases on a daily basis, may by July end have 5.5 lakh cases. Delhi’s Deputy Chief Minister Manish Sisodia said that going by present doubling rate in the city, which is 12.6 days, Delhi may soon be under the grip of the deadly virus and may need roughly 80,000 beds for patients gasping for breath. Incidentally, World Health Organisation (WHO) too has said that COVID-19 pandemic situation was worsening around the globe.

However, the Central government continues to insist that there was no community transmission of COVID-19 in the city yet.

“Delhi may record 44,000 COVID-19 cases by June 15 and it would need 6,600 beds in hospitals. By June 30, there would be one lakh cases of coronavirus in Delhi and we will need 15,000 beds. It is estimated that Delhi will record 2.15 lakh cases by July 15 and 33,000 beds would be required. There might be 5.5 lakh cases by July 31 and Delhi would need 80,000 beds," Mr Sisodia said. He added that in the given scenario, Delhi needs beds and ventilators for its owns residents who may have to scramble for these if people from outside Delhi are allowed to occupy beds in the city.

Delhi recorded 2289 fresh cases taking the COVID-19 tally in the city to close to 30,000 and the death toll to 874 after 113 new fatalities were reported. The recovery rate in Delhi is 37.92 per cent, much below the national average of 48.47 per cent. On Tuesday, Delhi Chief Minister tested negative for COVID-19 but former Congress leader who has now joined BJP, Jyotiraditya Scindia, tested positive and was admitted to hospital.

Delhi Health Minister Satyendar Jain blamed Centre for the spurt in cases of COVID-19 in the city due to flight operations. "Epidemiologically, community transmission is third stage of the infection... In Delhi, of the new cases being reported, in nearly half of the cases, the source of infection is not known," the health minister said.

In Maharashtra, that has reported over 88,000 cases, which is higher than China, on Tuesday, 54-year old Deputy Municipal Commissioner of Brihan Mumbai Municipal Corporation died of the virus and as per reports, 55 employees of BMC have died due to the virus and close to 2000 are under treatment.

Places like Sikkim and Daman that were so far clear of the virus too have started reporting cases. Fearing fast spread of novel coronovirus due to opening up of public places, Meghalaya government on Tuesday withdrew its earlier order that allowed religious places to reopen doors to devotees from June 14 saying congregations of any kind would have to be avoided for the time being, given the unrelenting rise in COVID-19 cases.

So far 10 cases of COVID-19 have also been detected among the Tibetan community living in India, of which 4 have recovered, 5 are under treatment and 1 has died. According to the Central Tibetan Administration (CTA), the few positive cases that have recently surfaced in the Tibetan community were all found to have travel history to red zones, mainly Delhi. CTA has asked its people to help check community transmission in its initial stage. Tibetan Health Department has started door-to-door screening of its persons and is also distributing immunity boosting Tibetan medicines among its 25 settlements throughout India.

The Health ministry has deployed multi-disciplinary central teams to 15 States/UTs that have more than 50districts/municipal bodies witnessing high case load and high spurt of virus, to assist the State Governments by providing technical support for containment and facilitate management of COVID-19 outbreak.