India   All India  10 Jun 2020  No respite from coronavirus for India as total cases reach 2.76 lakh
India, All India

No respite from coronavirus for India as total cases reach 2.76 lakh 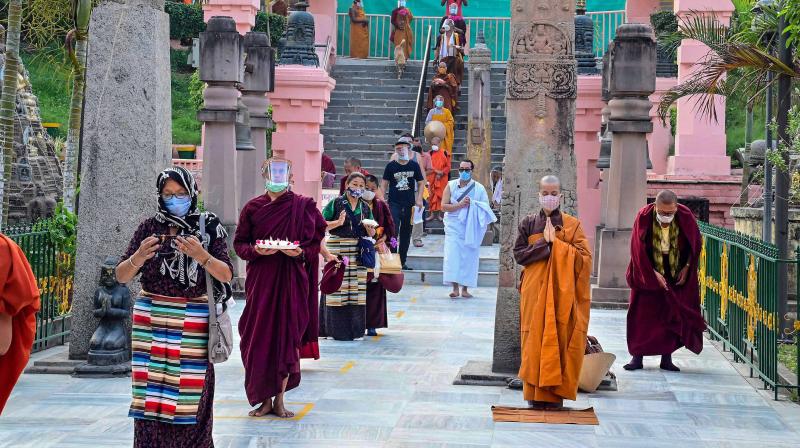 Devotees at the Bodh Gaya temple after it reopened on Sunday. (PTI)

India continues to under the tight grip of COVID-19 as it registered yet another 9,900+ increase in cases in the last 24 hours. While the death toll rose to 7,745, the number of cases climbed to 2,76,583. India registered 279 fatalities and 9,985 new infections in a period of 24 hours till Wednesday 8 am, the Union Health Ministry said on Wednesday.

The number of active cases in the country stands at 1,33,632, while 1,35,205 people have recovered, the ministry said. "Thus, 48.99 per cent of the patients have recovered so far," it said. India is the fifth worst-hit nation by the COVID-19 pandemic after the US, Brazil, Russia and the UK, according to data issued by the Johns Hopkins University.

Of the 279 new deaths reported, 120 were in Maharashtra, 33 in Gujarat, 31 in Delhi, 21 in Tamil Nadu, 18 in Uttar Pradesh, 11 in Telangana, 10 in West Bengal, nine in Rajasthan, six each in Madhya Pradesh and Haryana, three in Jammu and Kashmir, two in Punjab, Karnataka, Chhattisgarh and Andhra Pradesh, and one each in Bihar, Jharkhand and Tripura.

The death toll reached 77 in Andhra Pradesh, 66 in Karnataka and 55 in Punjab.

Jammu and Kashmir has reported 48 fatalities due to the disease, while 45 deaths have been reported from Haryana, 32 from Bihar, 16 from Kerala, 13 from Uttarakhand, nine from Odisha, eight from Jharkhand and six from Chhattisgarh.

Himachal Pradesh and Chandigarh have registered five COVID-19 fatalities each and Assam has recorded four deaths so far.

Meghalaya, Tripura and Ladakh have reported one COVID-19 fatality each, according to the ministry data.