Two die in fire at gas well in Assam's Tinsukia 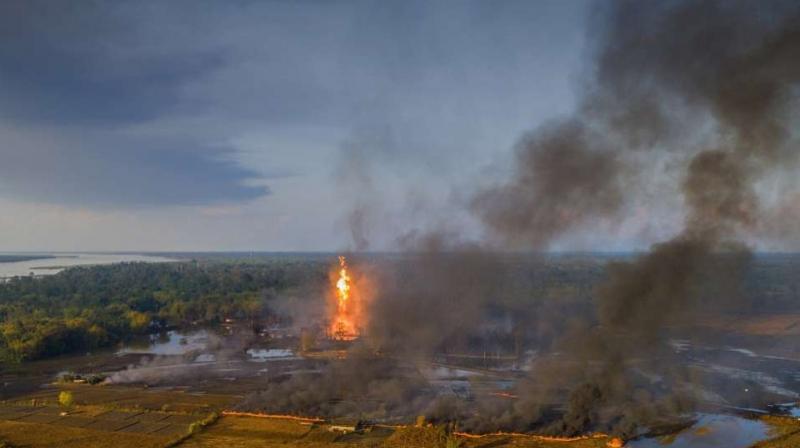 An aerial view of the Baghjan oil field engulfed in fire, in Tisukia, Assam on Tuesday, June 9, 2020. The field has been leaking gas for the past two weeks. (PTI)

Guwahati: Even as experts from Singapore continue to struggle to control fire at Baghjan oil field, the National Disaster Response Force (NDRF) personnel on Wednesday morning retrieved the bodies of two firemen of Oil India Limited, who were missing since an oil well at Baghjan oilfield in eastern Assam’s Tinsukia district exploded on Tuesday afternoon.

The two deceased employees of OIL have been identified as Durlov Gogoi and Tikheswar Gohain. Pointing out that  the duo were on duty at the site when the well exploded, official sources said that  a third fireman was injured and admitted to hospital on Tuesday.

Informing that because of the inferno, it was impossible for anyone to go in the vicinity of the burning well on Tuesday, official sources said that NDRF personnel could launch their rescue operation on Wednesday. As the oil condensate at the surface has now burnt out, the surrounding areas have also become visible now, said the sources.

The OIL authorities engaged in fire-fighting with Singapore-based firm M/s Alert Disaster Control said, “The ALERT Team is of view that it is now a safe environment for working. They are confident that the situation can be controlled and the well can be capped safely.

The situation demands arrangement of large quantities of water, installation of high discharge pumps and removal of debris. All the operations as per ALERT will take about 4 weeks.” However, fire-fighters will try to reduce timeframe to control the fire.

The fire is still raging and has engulfed nearby residential areas forcing over 1,600 families to flee their homes. The Baghjan oil field blowout is threatening the environment of the area too.

The blowout occurred at a producing well number 5, which is situated in the vicinity of Dibru Saikhowa National Park, a biodiversity hotspot and Maguri-Motapung Beel, which is home to migratory birds.

Mr Sonowal also spoke to Union Petroleum Minister Dharmendra Pradhan to inform him about the explosion at the Baghjan oilfield and the resultant fire engulfing the area.

He urged Mr Pradhan to take urgent steps for extinguishing the fire at the earliest while directing the Tinsukia district administration and police to take necessary measures for safeguarding the interest of the local people of the affected area.

Mr Sonowal told reporters that necessary steps have been taken by the state government to ensure safety of local people in the Baghjan area and instructions have been sent to civil and police administration about the same.

He said that the chief secretary and DGP have been directed to take active steps to control the situation while keeping the armed and paramilitary forces, fire brigade, NDRF and SDRF engaged to ensure safety of the people in and around the affected area.

Mr Sonowal also called upon the people in the affected area not to panic as both the Central and state governments have been taking measures to ensure their safety. The chief minister has also directed industry and commerce minister Chandra Mohan Patowary to immediately visit Baghjan and take stock of the situation.