The CM reached Gorakhpur on Saturday to prepare for the Guru Purnima celebrations at the Gorakhnath temple of which he is the chief priest. 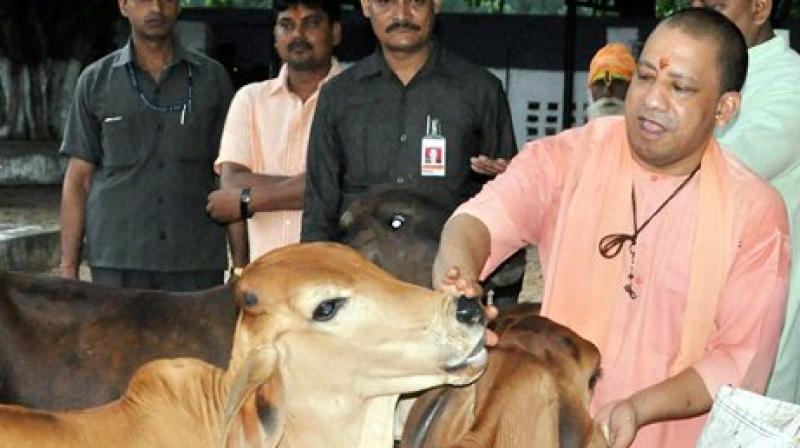 UP CM Yogi Adityanath with cows during the Guru Puranima festival at Gorakhnath temple in Gorakhpur. (Photo: PTI)

Lucknow: UP chief minister Yogi Adityanath on Sunday slipped into his familiar role at the Gorakhnath temple in Gorakhpur as he offered prayers to his spiritual guru Mahant Avaidyanath and then gave blessings to his disciples.

On Guru Purnima, Yogi Adityanath reverted to his religious role and started the day by offering prayers to Mahant Avaidyanath and then engaged in “gau sewa” at the temple’s cow shelter.

Yogi Adityanath’s chief disciple, Kamalnath, who looks after temple duties in his absence performed “tilak” on his guru and offered a “dakshina” amidst chanting of mantras. He was followed by other disciples.

At least 40 saints belonging to the Nath sect – to which the chief minister belongs — had come to the Gorakhnath temple from different parts of the country for the Guru Purnima puja.

Later, Yogi Adityanath also tweeted a picture of himself performing guru pujan. The picture shows him performing puja of his guru, Mahant Avaidyanath.

The CM reached Gorakhpur on Saturday to prepare for the Guru Purnima celebrations at the Gorakhnath temple of which he is the chief priest.

Guru Purnima is held on the full-moon day of the Hindu month of Ashadha.