The search operation turned into an encounter after the militants opened fire on the security forces, who retaliated. 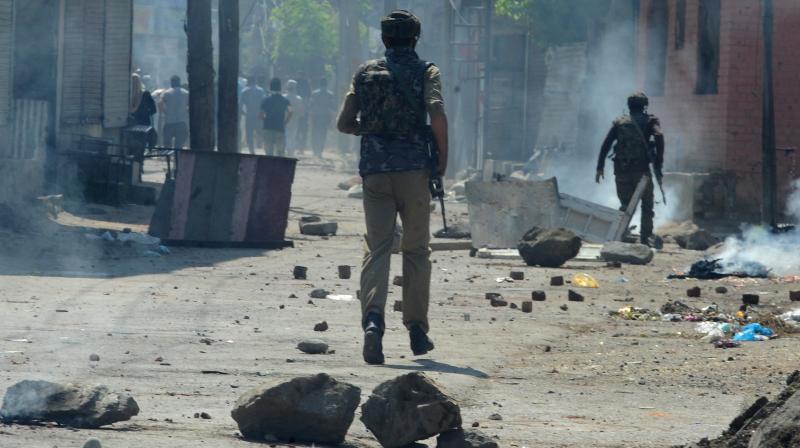 At least 20 civilians were injured in the security forces action to chase away the protestors. (Representational Image)

Srinagar: Two Jaish-e-Mohammad (JeM) militants, including a Pakistani national, were on Tuesday killed in an encounter while a civilian died and 20 others sustained injuries during clashes with security forces near the scene of the gunbattle in Shopian district of Jammu and Kashmir, police said.

A police spokesman said a joint patrol of the security forces launched searches in the Kundallan area of the district in the early hours of Tuesday following credible leads about the presence of terrorists there.

As the searches were going on, militants hiding inside the house fired upon the search party, who in their guarded response fired back, leading to an encounter, he said.

The spokesman said some civilians in the nearby houses were quickly evacuated by the security forces.

"During the encounter, all the hiding terrorists were eliminated successfully by the joint patrol of the security forces. The slain terrorists were identified as Sameer Ahmad Sheikh, a local, and Babar from Pakistan," he said, adding that the ultras were affiliated with proscribed terror outfit JeM.

Sheikh was a school dropout and had joined the JeM after he was reported missing from his home since April 2018, the spokesman said.

"On the basis of documents available, the other terrorist has been identified as Babar, a JeM commander of Pakistani origin. They were involved in many attacks on the security establishments and civilian atrocities," he said.

The spokesman said some civilians were also injured in cross firing at the encounter site, who were later evacuated to a hospital for medical attention.

"One of the injured persons later succumbed to injuries while the other injured are stated to be stable now," he said.

When the operation was in progress, a police official said, a large number of civilians rushed towards the encounter site and started pelting stones at security forces.

At least 20 civilians were injured in the security forces action to chase away the protestors, he said, adding eight among them have been referred to hospitals here for specialised treatment.