Orbiter will image lunar surface, map minerals on the moon. 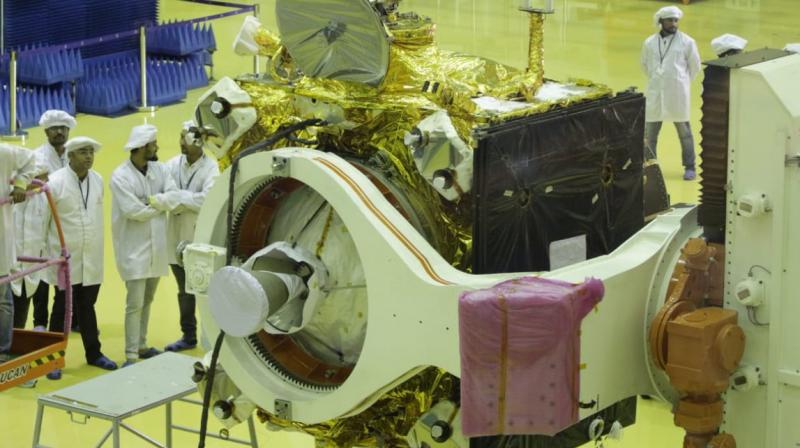 The Rs 1,000-crore orbiter-lander-rover mission would reach an orbit about 100 km from the Moon in the first week of September. (Photo: ANI)

BENGALURU: Those bright orange flames were missing, as was the earth-shaking roar of rocket engines, but the task was successfullycompleted as Indian space scientists carried out the first full dress rehearsal ahead of launch of Chandrayaan-2, India’s second probe to the Moon, ahead of its flight on Monday, July 15, onboard the gigantic GSLVMkIII rocket, from Satish Dhawan Space Centre, Sriharikota Range.

During the dry run, space scientists simulated a blast-off of the rocket, an 18-minute flight before setting free Chandrayaan-2 on its journey of more than three lakh km towards the Moon, and functioning of the Deep Space Network Station on the outskirts of Bengaluru. The Rs 1,000-crore orbiter-lander-rover mission would reach an orbit about 100 km from the Moon in the first week of September. Subsequently, the lander ‘Vikram’, carrying the rover ‘Pragyan’ in its belly would make a soft landing in the South Pole region of the earth’s nearest astral neighbour, according to sources in Indian Space Research Organisation.

Sources said, with 13 instruments onboard (eight on the orbiter, three on the lander, and two on the rover), and one from Nasa, Chandrayaan-2 would push the boundaries of scientific knowledge to unravel mysteries of the universe, and trace the origin and evolution of the Moon, thus fostering a new age of discovery.

While the orbiter would image the lunar surface and map minerals on the moon, the lander, weighing 1,471 KGs, would measure the presence of Moon-quakes and the temperature of the Moon’s surface.