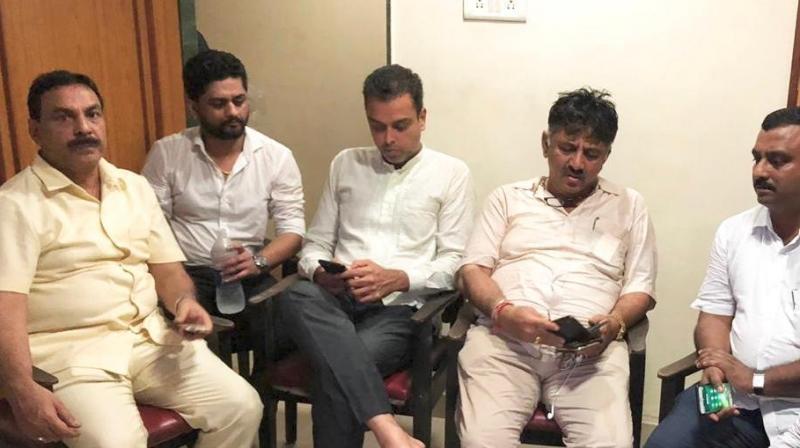 Shivakumar was detained along with other Congress leaders from Mumbai and was taken to the Kalina University rest house. (Photo: Twitter I ANI)

Mumbai: Senior Karnataka Congress leader D K Shivakumar, who had camped outside the Mumbai hotel where rebel MLAs are holed in, was detained by the Mumbai police on Wednesday afternoon.

The police also imposed Section 144 in the area after a day-long drama that saw rebels shouting 'Go back Shivakumar' while the Congress' firefighter leader dug his heels in outside the hotel.

Shivakumar was detained along with other Congress leaders from Mumbai and was taken to the Kalina University rest house.

The speaker has confirmed that he has received these resignations. However, he has not accepted any of them.

"I have not accepted any resignation, I can't do it overnight like that." The rebel MLAs have been given time till July 17th. A decison will be taken after he goes through the procedure.

Read: Kumaraswamy has no moral right to continue as CM, should step down: Yeddyurappa

Earlier in the day, Shivakumar was stopped outside the hotel in Mumbai after the MLAs refused to meet him.

The hotel also cancelled his booking. Undeterred, Shivakumar camped outside the hotel and said he would go back only after he had spoken to his colleagues. "I am not afraid and will not go home without meeting my friends," he said.

Speaking to the media, he said: "Nothing is permanent in politics. There are no friends and no enemies. Anyone can turn at any moment. I'm trying to contact them. I'll get a call. Their heart is beating to meet their friend."

Speaking to reporters outside the Renaissance Mumbai Convention Centre Hotel, Shivakumar had earlier said: "I have booked a room here. My friends are staying here. There has been a small problem, we have to hold negotiations. We can't go for a divorce immediately. There is no question of threatening, we love and respect each other."

Rebel Congress leader B Basavaraj said, "We don't intend to insult DK Shivakumar. We've faith in him but there is a reason we have taken this step. Friendship, love and affection are on one side, with gratitude and respect we request him to understand why we cannot meet him today."

The Mumbai Police escorted Shivakumar away from the gates of the hotel after he could not enter.

Former K'taka CM and BJP leader BS Yeddyurappa met the Karnataka governor on Wednesday. He requested the Governor to convey to the speaker that he should take necessary action immediately.

"Kumaraswamy has no moral right to continue as Chief Minister, they don't have the numbers," Yeddyurappa said.

Security was tightened outside the hotel after the rebel MLAs wrote a letter to Mumbai Commissioner of Police on Tuesday seeking protection, stating: "We have heard the Chief Minister and D K Shivakumar are going to storm the hotel, we feel threatened."

"We do not want to meet him (Shivakumar), kind request to help us in this matter and do not allow them to enter the hotel premises," the letter added.

The 13-month old Congress-JD(S) government slumped into crisis following the resignation of 15 MLAs from the membership of the state Assembly last week.

The Congress-JD(S) coalition is making all efforts to protect its government which seems to have fallen short of a majority.

Chief Minister HD Kumaraswamy has also claimed that they will overcome the current crisis. All the ministers from the two parties have resigned paving way for the restructuring of the state Cabinet in a bid to accommodate the dissident MLAs.

The Congress party has been constantly accusing the BJP of conspiring to topple Congress-JD(S) coalition government in Karnataka.

However, Defence Minister Rajnath Singh, in his reply in Parliament, asserted that his party was committed to parliamentary democracy and had no relation with the developments in Karnataka.