The number of recoveries stands at 4,95,51, while there are 2,76,685 active cases of coronavirus infection 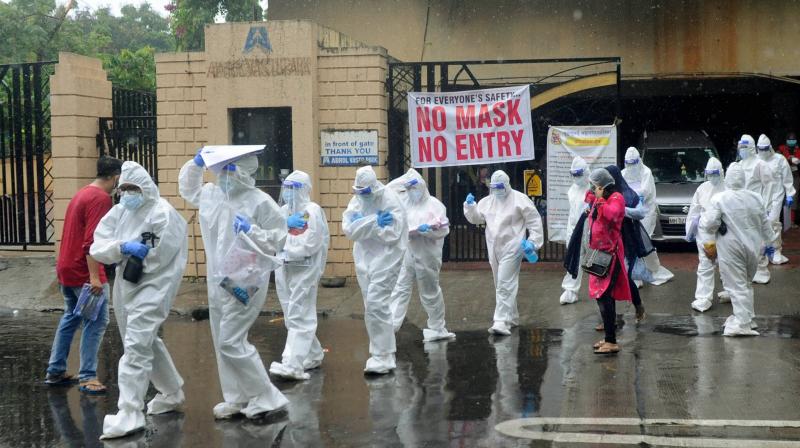 Union Health Ministry on Thursday reiterated that the high number of novel coronavirus cases in India are largely localized outbreaks in some pockets and the deadly virus has still not entered the community transmission stage in the country.

India saw yet another record single-day jump of 26,506 COVID-19 cases pushing its tally to 7,93,802 on Friday, while the death toll climbed to 21,604 with 475 people succumbing to the infection, according to the Union Health Ministry data

The number of recoveries stands at 4,95,51, while there are 2,76,685 active cases of coronavirus infection presently in the country, the updated data at 8 am showed.

"Thus, around 62.42 per cent of patients have recovered so far," an official said.

Of the 475 deaths, 219  are from Maharashtra, 65 from Tamil Nadu, 45 from Delhi, 27 from West Bengal, 17 from Uttar Pradesh, 16 from Karnataka, 15 from Gujarat, 13 from Andhra Pradesh, 9 from Rajasthan, eight from Bihar, seven from Telangana, six from Assam, five each from Haryana, Madhya Pradesh, Jammu and Kashmir and Punjab, four from Odisha and one from Chhattisgarh, Goa, Jhakhand and Meghalaya.

The government is happy with the improving recovery rate which is now 62.42 per cent and the number of recovered persons is 1.75 times that of active cases. The gap between the recovered and active cases is widening and has crossed 2 lakhs.

“Cases per million population in some countries are at least 16-17 times more than what it is in India. We have 15 deaths per million population whereas in other  countries it is 40 times higher,” said Rajesh Bhushan, OSD, Ministry of Health. On the MIT Study that claimed India will have 2.87 lakh cases per day by February 2021, Mr Bhsuahn said  a lot of parameters cannot be interpreted in mathematical models and there is no account of how the virus will behave and how the communities will respond to it.

Meanwhile, Union Home Ministry said that the situation in Delhi has shown remarkable improvement as the recovery rate goes over 72 per cent and doubling rate is now nearly 30 days.