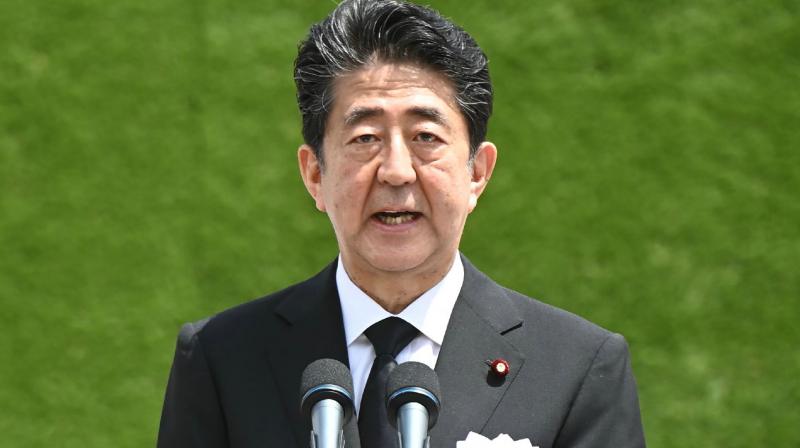 New Delhi: In a significant move, Quad leaders Prime Minister Narendra Modi, US President Joe Biden, and Australian Prime Minister Anthony Albanese issued a joint statement on Saturday collectively mourning the tragic assassination of former Japanese Prime Minister Shinzo Abe earlier on Friday in Japan. The joint statement recognised Mr Abe as a transformative leader who played a formative role in the founding of the Quad partnership and lauded his efforts towards advancing a free and open Indo-Pacific region. This came even as India observed a day-long mourning on Saturday as a mark of respect for the slain Japanese leader.

In the statement, the three leaders said, "We, the leaders of Australia, India, and the United States, are shocked at the tragic assassination of former Japanese Prime Minister Shinzo Abe. (Former) Prime Minister Abe was a transformative leader for Japan and for Japanese relations with each one of our countries. He also played a formative role in the founding of the Quad partnership, and worked tirelessly to advance a shared vision for a free and open Indo-Pacific. Our hearts are with the people of Japan -- and (current) Prime Minister (Fumio) Kishida -- in this moment of grief. We will honor Prime Minister Abe’s memory by redoubling our work towards a peaceful and prosperous region."

On Saturday, the Indian national flag was flown at half-mast throughout the country. External affairs minister (EAM) S. Jaishankar visited the Japanese embassy in New Delhi to convey his condolences to Japanese ambassador Satoshi Suzuki on the assassination of Mr Abe. The EAM tweeted, "At a personal level, he was the very embodiment of grace and consideration. I have myself experienced his warmth over the years. We join in the profound sorrow of the people of Japan and convey our support and sympathy to Mrs. Akie Abe. For more than two decades, Shinzo Abe has symbolised our growing relationship. Many of its key initiatives were his personal efforts. He placed our ties in a larger global context of the free and open Indo-Pacific."

Earlier on Friday, New Delhi had said, "The government and people of India are deeply saddened by the untimely demise of former Prime Minister of Japan, H.E. Mr Abe Shinzo, and convey their sincere condolences to his family and friends and the people of Japan. Mr Abe was a visionary leader and statesman who worked tirelessly for the betterment of humanity. He left an indelible impression on the hearts and minds of people across the world."

Recognising Mr Abe’s contributions towards elevating India-Japan relationship, New Delhi had added, "During his visit to India in August 2007 as Prime Minister, Mr Abe delivered his famous "The Confluence of Two Seas" speech in the Indian Parliament, in which he stated that the India-Japan relationship is blessed with the largest potential for development of bilateral relationship anywhere in the world. His efforts have been instrumental in bringing our nations together to realise a free, open, and inclusive Indo-Pacific. Mr Abe’s immense contributions elevated the India-Japan relationship to the level of a special strategic and global partnership. A large number of milestone projects between India and Japan were initiated during his tenure as the Prime Minister of Japan. The awarding of India’s second highest civilian award, Padma Vibhushan, to Mr Abe is testament to the respect and warmth that he enjoyed in India."

India had further said, "Mr Abe had assumed the leadership of both the Japan India Parliamentary Friendship League (JIPFL) and the Japan-India Association (JIA) in 2022, a reflection of his deep commitment to bolstering the India - Japan partnership. The loss of a great friend of India has been felt across our nation... The whole of India mourns with Japan, and we stand in solidarity with our Japanese brothers and sisters in this difficult moment."