According to Jammu District Magistrate, all schools, colleges and academic institutions may resume their functioning normally from Aug 10. 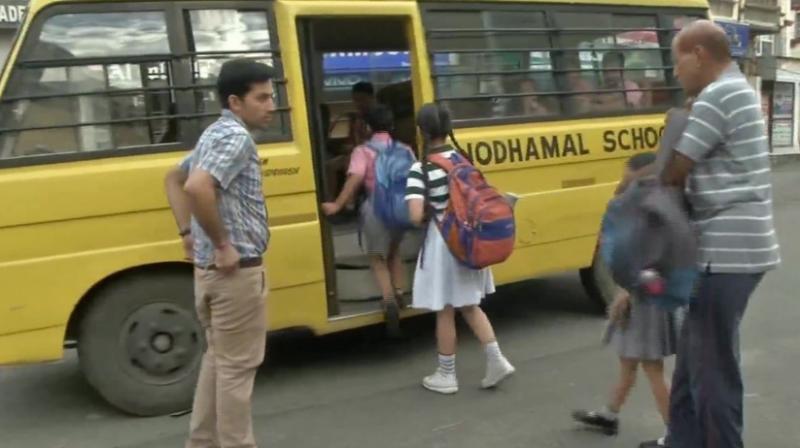 A police official said most of the educational institutions in Samba, Udhampur and Kathua districts resumed normal activities on Friday. (Photo: ANI)

Jammu: Prohibitory orders under CrPC Section 144 were lifted in Jammu and curfew was relaxed in Doda and Kishtwar districts on Friday, paving the way for resumption of normal activities that were badly hit after special status of Jammu and Kashmir was abrogated, officials said.

The situation in Kathua, Samba and Udhampur districts was largely normal and most of the educational institutions there reopened on Friday, they said.

Restrictions, however, continued to be in place in Poonch, Rajouri and Ramban districts, the officials said.

The Jammu district administration on Friday withdrew prohibitory orders under CrPC Section 144 imposed on August 5 in view of the Centre's move, according to an official order.

According to the order issued by Jammu District Magistrate Sushma Chauhan, all schools, colleges and academic institutions may resume their functioning normally from August 10.

District development Commissioner of Kishtwar Angrez Singh Rana said the curfew was relaxed for one hour in a phased manner in different parts of the town for the first time since its imposition on Monday.

"Friday prayers passed off peacefully across the district. The curfew was first relaxed in areas falling under Kudleed, Wasar, Sangrambhata and Girinagar from 4 pm to 5 pm and then relaxed in Pachhal-A, Pochal-B, Hatta, Sarkoot and Bhagwan Mohalla areas from 6 pm to 7 pm," Rana told PTI.

The situation remained peaceful, he said, adding the curfew will be relaxed in other parts of the town and its adjacent areas on Saturday.

The officials said the curfew was also relaxed in Bhadarwah town and its adjoining areas in Doda district in a phased manner.

While the curfew was relaxed in Takia Chowk, Sadar Bazar, Masjid Mohallah, Qilla Mohalla, Pasri, Green Colony, Chakka and Chinote for two hours from 4 pm to 6 pm, it was relaxed in for one hour from 6 pm to 7 pm in Seri Bazar, Ganpat Market, Jai Road, Chobia Link Road, Gatha and Udrana.

The curfew-relaxed period passed off without any untoward incident, the officials said, adding some shops and business establishments opened after five days and people in large numbers thronged the markets to buy essentials.

A police official said most of the educational institutions in Samba, Udhampur and Kathua districts resumed normal activities on Friday.

The situation in Ramban, Poonch and Rajouri districts was also normal and people offered Friday prayers in a peaceful manner amid heavy deployment of forces to maintain peace, the officials said.