Heightened restrictions were imposed in Kashmir Valley in view of the Centre abrogating special status of J&K. 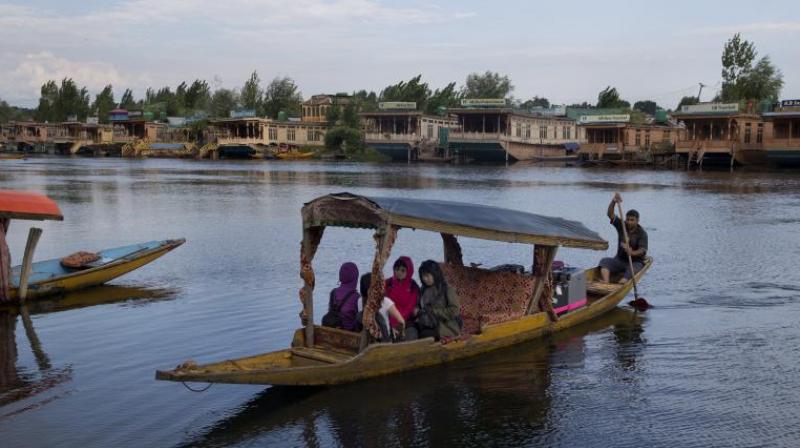 According to taxi operators and other stakeholders of the tourism industry, their business will suffer till normalcy returns to Kashmir and tourists are drawn back. (Photo: Representational | AP)

Srinagar: Notwithstanding the strict restrictions, business was brisk at the taxi stand at the Srinagar International Airport on Saturday as Kashmiris from other parts of the country and abroad were returning home for Eid, but apprehensions remained about the coming days.

According to taxi operators and other stakeholders of the tourism industry, their business will suffer till normalcy returns to Kashmir and tourists are drawn back.

Heightened restrictions were imposed in Kashmir Valley in view of the Centre abrogating special status of Jammu and Kashmir and dividing the state into two Union Territories.

On August 2, days before the moves were announced, the Jammu and Kashmir administration curtailed the Amarnath Yatra and asked the pilgrims and tourists to leave Kashmir Valley.

The tourism industry is the backbone of Kashmir's economy and survived the three-decade-long militancy, bouncing back every time there was a severe setback. This year, the tourism season began late due to the terror attack in Pulwama in which 40 CRPF personnel were killed, increased hostilities between India and Pakistan after the Balakote air strike, security restrictions on the Jammu-Srinagar national highway to facilitate smooth passage of security convoys and the parliamentary elections.

"The tourism season is over and all the stakeholders are staring at a bleak future...we don't see any revival till March next year given the atmosphere in the valley over the revocation of Article 370 of the Constitution," Mohammad Ashraf Lone, the president of the taxi operators' union at the airport, told PTI.

He said they were expecting a good season before the government moves. "Our (taxi) stand is totally dependent on tourist arrivals because most of the locals use to call their families to get their private vehicles for travelling from airport to their homes. Since the government has snapped the phone and Internet connectivity, we are providing our services to ensure that they reach their homes safely," he said.

Lone demanded early restoration of at least landline telephone and issuance of curfew passes to taxi operators to run smoothly. He said 85 per cent of the 200-odd taxi operators at the stand have taken loans from banks and they are now concerned about paying monthly instalments ranging between Rs 8,000 and Rs 20,000. "We know the arrival of local residents will also dry up after Eid on Monday and we will be left with no job...," he said.

Those who landed at the airport on Saturday, including students returning home for the festival of sacrifice, were visibly anxious and ready to pay extra money to find a taxi to home.

"I had planned my visit months ago to celebrate Eid with my family after a long time. The communication blockade needs to go immediately as it is pushing the people towards desperation...at least they should restore the landline to allow people to know the welfare of their family," a Kashmiri returning from Mauritius said, loading his luggage on a tempo to leave for his home in the Civil Lines area of Srinagar.

The local administration had taken several measures, including easing restrictions in some parts of the city, and are planning to run special bus service to facilitate easy movement of stranded people. It has also set up 300 telephone booths at various places as part of efforts to minimise inconvenience to the people.

Three girl students have arrived from Jammu where they are pursuing physiotherapy courses and were fretful how to reach their homes in the volatile downtown Srinagar. "Our families do not know about our arrival otherwise someone would have come to pick us up," Kousar, one of the students, said.

Not only the taxi operators, hoteliers, house boat owners and tour and travel agents expressed apprehensions about loss of business. "The salary bill of my staff per month is over rupees one lakh. We have to pay them whatever the situation, because it is my moral obligation. I cannot ditch them at this juncture which tantamount to injustice," Mir Tawseef, a leading travel agent, said, adding the development has dealt a virtual death knell to the already struggling economy of the valley.

"The tourism season is gone and it is unlikely that the tourists will return soon," Bashir Ahmad, a house-boat owner, said sitting on the banks of the famous Dal Lake, praying for peace and return of normalcy to the land. Ahmad said many of the house-boat owners have taken loan from banks and it is very difficult to pay monthly instalments in the current situation. "The education of our children is also at stake," he said.

Farooq Ahmad Dar, a shikarawala (boatman), said, "We have to look for alternative like daily labour." The Dal Lake -- the star attraction for tourists visiting the valley -- wore a deserted look on Saturday.