The former IAS topper was released from detention in June 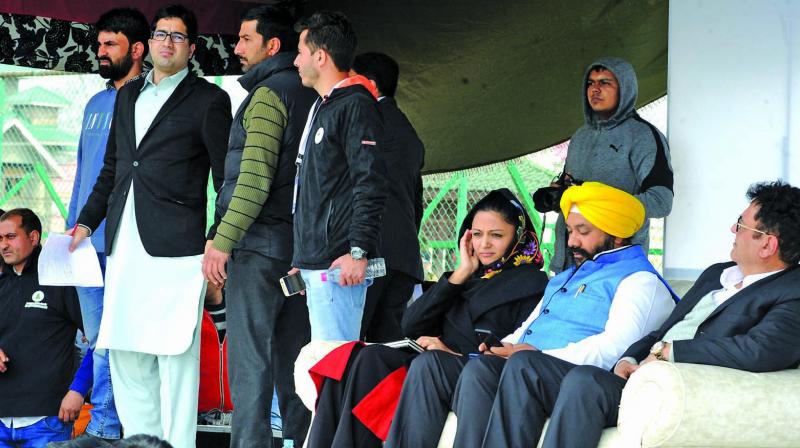 File photo of Shah Faesal (second from left) at a rally to launch his party J&K People's Movement. (AA Photo: H U Naqash)

Srinagar: Amid speculation that Shah Faesal may shun politics and return to bureaucracy, the 2010 IAS topper has deleted his political bio as founder of the Jammu & Kashmir People's Movement (JKPM) from his Twitter handle.

The last time Faesal posted on the micro-blogging site was on August 13, 2019 when he retweeted a tweet of BBC’s Hardtalk show host Stephen Sackur which quoted him (Shah Faesal) as saying “India has ‘murdered’ democracy (in Jammu & Kashmir)... the choice is to be a stooge or a separatist”.

Sackur had then said this was a “deeply depressing analysis of #Kashmir situation from @shahfaesal the voice of a Kashmiri ‘moderate'”, after J&K was stripped of its special status and split into two Union Territories by the Centre on August 5 last year.

Faesal was soon detained by the police and subsequently booked under the stringent Public Safety Act (PSA).

After spending nearly ten months in makeshift jails, the 36-year-old bureaucrat-turned-politician was released on June 3 this year. He did not make any statement after his release and did not react to reports in the media that he was among the politicians and activists who were set free by the authorities after they signed a bond agreeing to cease political activities.

Faesal took the country by storm after quitting his job in January 2019 to protest against the “unabated killings and lack of political outreach from New Delhi, marginalization and invisibilization of around 200 million Indian Muslims at the hands of Hindutva forces and growing culture of intolerance and hate in mainland India in the name of hypernationalism”.

On March 17, 2019, he floated a new political party named Jammu & Kashmir Peoples’ Movement (JKPM) with the slogan “Ab Hawa Badlaygi (now there will be winds of change)”. At a rally on that day he also announced, “I’ve come here not to engage in traditional or regional politics but together with my team and the people who are joining us I seek an amicable solution of the Kashmir problem as per the wishes and aspirations of its people.”

He also asserted that the new party believes in shortening the distance between Delhi and Srinagar and will act as a catalyst towards resolving the Kashmir issue by India and Pakistan.

Official sources here said Faesal’s resignation as IAS officer has not still been accepted. Despite submitting his resignation twenty months ago and subsequently forming a political party, his name has not been removed from the list of J&K cadre IAS officers on the official website of the government.

Faesal has not reacted to reports that he may rejoin civil services. Repeated attempts by this correspondent to reach him were not successful.

Meanwhile, Feroz Peerzada, his deputy in the party, has replaced Faesal as the JKPM president.

As per a statement issued by JKPM, Faesal has informed the party’s state executive members that he is “not in a position to continue with political activism and wanted to be freed from the responsibilities of the organization.”

The statement added that keeping in view his request, it was decided to accept his resignation “so that he can better continue with his life and contribute whichever way he chooses.”

The statement further said that former minister and JKPM chairman Javed Mustafa Mir has also quit. He had joined the JKPM after leaving PDP last year.