India   All India  10 Aug 2020  Peace talks between Centre, NSCN (IM) and NNPGs to conclude by September
India, All India

Peace talks between Centre, NSCN (IM) and NNPGs to conclude by September

Government already rejected the demand for a separate flag and constitution for Nagaland, the sources said 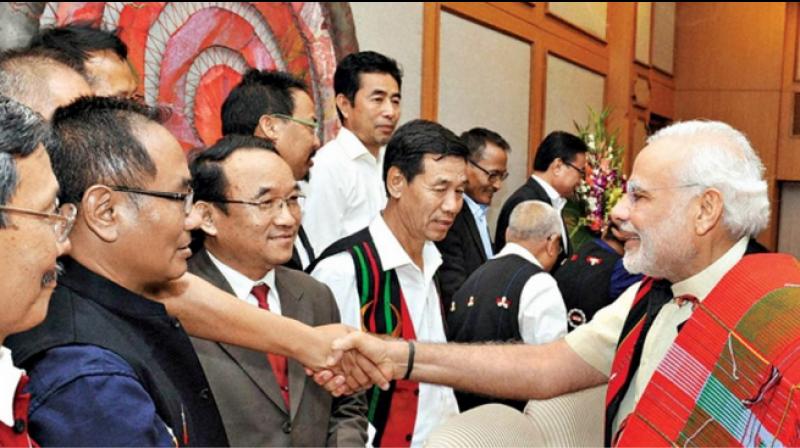 Prime Minister Narendra Modi meets Nationalist Socialist Council of Nagaland (NSCN–IM) leaders at the signing ceremony of the framework agreement between the government of India and NSCN(IM) in New Delhi. (File Photo- PTI )

Guwahati: The Centre has decided to conclude the decades-old peace talks with the NSCN (I-M) and NNPGs (Naga National Political Groups) in Nagaland by September this year, for which a process of thrashing out differences over some of the minor rhetorical issues will start next week in meetings in New Delhi between the collective leadership of the NSCN (I-M) and the Prime Minister’s special envoy for Naga talks R.N. Ravi, who is also the governor of Nagaland.

Saying that the Prime Minister’s Office had set a September deadline for the final settlement of all Naga political issues, authoritative security sources told this newspaper that the date and place of signing of the historic peace accord, bringing an end to  one of India’s oldest armed insurgencies, is yet to be decided.

Saying that Ravi was leaving for New Delhi from Kohima on Tuesday, the sources said the NSCN (I-M) delegation has already reached New Delhi for the talks. Saying that a consensus had already been created on a majority of the issues, apart from the demand of for a separate flag and constitution, the sources said the NSCN (I-M) was also insisting on some changes in the “language” of the final draft agreement that will be come up for discussion at the meeting.

Indicating that the focus of the talks in New Delhi would also be to work out the date and place for signing of the peace accord, the sources said the interlocutor would also be asking the Naga rebel groups to submit the list of cadres and inventory of arms and ammunition.

Stating that an accord will be signed after the surrender of the inventory of weapons by the cadres, the sources said the Union home ministry, in consultation with the interlocutor, was also preparing a rehabilitation package for the Naga rebels.

Clarifying that the Covid-19 situation had delayed the peace process, the sources said the government had already rejected the demand for a separate flag and constitution for Nagaland, but the NSCN (I-M) was still insisting on discussing these issues. Saying these two contentious issues may be left for negotiations between the state and Central governments after the signing of the accord, the sources said a vested interest group was working overtime to derail the peace process.

“As Naga peace talks started in 1997, a vested interest group is already developed and active. They know they can’t derail the peace process so they have been working hard to ensure that the status quo is maintained,” the sources said, while rejecting media reports making claims such as a change of interlocutor to the NSCN (I-M) refusing to join the talks, etc.

About the talks being held in New Delhi instead of Kohima, the sources said the decision to hold the talks in New Delhi was taken by Ravi given the health issues of 86-year-old NSCN (I-M) general secretary Th Muivah, who is now under treatment in New Delhi.

The security sources said the interlocutor and NSCN (I-M) negotiators may have more than one or two rounds of meetings before finalisation of the modalities of the Naga pact for which the NSCN (I-M), the working committee of Naga National Political Groups and other stakeholders will be the signatories.

It is significant that the Naga insurgency has been one of India’s oldest conflicts. Right from Independence, the Naga groups have asserted their distinct identity and sought to break away from the Indian Union. Led by Angami Zipo Phizo, the movement for secession took a violent turn in the 1950s. When some elements signed a peace accord with the government, a more radical outfit — the Nationalist Socialist Council of Nagaland (NSCN) — was set up under the leadership of T. Muivah, Isak Swu and S.S. Khaplang. The group later split.

In 1997, New Delhi began engaging closely with the NSCN, led by Isak and Muivah (I-M). A ceasefire was declared. Multiple rounds of talks were held. Violence dipped -- even though the insurgents maintained a parallel government in the state. And in August 2015, a framework agreement was signed that has not only managed to neutralise the Naga extremists but also shattered the backbone of the insurgency across the entire Northeast. A distinct evolution in the Naga position is visible, the security sources added.