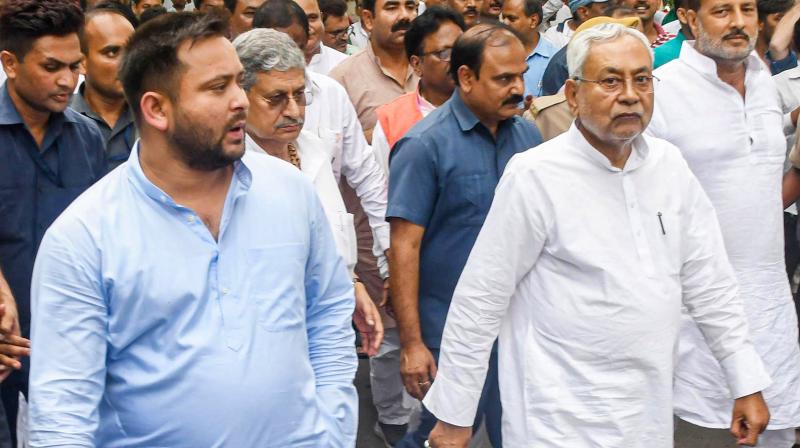 Seven parties including 164 MLAs along with independent MLA in our Mahagathbandhan, says Nitish Kumar at a joint presser with RJD's Tejashwi Yadav after meeting Bihar Governor.

Kumar ended his alliance with the Bharatiya Janata Party-led (BJP) National Democratic Alliance and rejoined hands with RJD on a day of rapidly changing political developments in Bihar.

According to a tweet by Kumar's new alliance partner RJD, the swearing-in ceremony will be held at 2 pm at Raj Bhavan.

"The swearing-in ceremony of Honorable Chief Minister and Deputy Chief Minister will be held tomorrow at 2 pm at Raj Bhavan," the party said in a tweet from its official handle.

While the RJD tweet did not mention any names, it is widely expected that Nitish Kumar would be the chief minister while Tejashwi Yadav would become his deputy.

In a day of fast-paced political developments, Bihar's chief minister Nitish Kumar twice met Governor Phagu Chauhan, first to hand over his resignation as NDA chief minister and then after being elected leader of the RJD-led `Mahagathbandhan' (grand alliance) to stake a claim for the top job in the state once again.

Kumar said he submitted a list of 164 MLAs to the governor who will decide when the oath-taking can take place. The effective strength of the state Assembly is 242 and the magic figure is 122.

Notably, it will be the eighth time when Nitish Kumar will be sworn in as Chief Minister of Bihar.

Meanwhile, BJP lashed out at Nitish Kumar over his decision and said he had "disrespected the mandate given by the people of Bihar".

Nitish Kumar, who talked to the media with Tejashwi Yadav, said they have the support of seven parties in Mahagathbandhan. Tejashwi Yadav attacked the BJP and claimed the party does not have an alliance partner across the Hindi heartland.He accused BJP of trying to destroy parties with whom it forms alliances.

"Across the Hindi heartland, BJP does not have any alliance partner. History shows that the BJP destroys the parties with whom it forms alliances. We did see that happening in Punjab and Maharashtra," he said.
He also referred to the remarks of BJP president JP Nadda.

"JP Nadda said they will end regional parties. BJP knows only to intimidate and buy people. All of us wanted the BJP's agenda shouldn't be implemented in Bihar, we all know Laluji stopped the 'Rath' of Advaniji, and we won't relent at any cost," Yadav said.

Kumar, who was a long-time BJP ally before snapping ties in 2013 and again joining hands in 2017, said that there was a unanimous decision in the party meeting in the morning "to break off ties".

JD-U and BJP had fought the 2020 assembly polls together and Nitish Kumar was made the chief minister of the alliance though the BJP had won more seats. Nitish Kumar's ties with BJP stretched to over two decades and he was a minister in the Atal Bihari Vajpayee government in 1996.

JD-U leaders indicated that factors including the developments related to the exit of RCP Singh from the party had soured the ties with BJP. JD-U leaders have also been chaffing at the role of Lok Janshakti Party (Ram Vilas) leader Chirag Paswan during the 2020 assembly polls and have indicated that his putting up candidates from seats contested by the party had damaged it.

JD-U is the third major ally to leave the BJP in the past over three years after Shiv Sena and Shiromani Akali Dal.