The death toll was likely to increase as some of the workers rescued from the debris were critically injured. 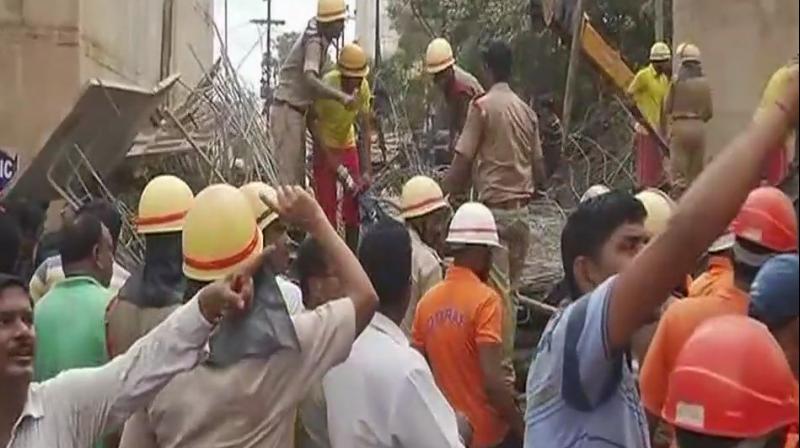 Bhubaneswar: At least one person was killed and a few others were feared trapped under the debris of under construction flyover that collapsed at Bamikhal in Bhubaneswar.

The deceased man was identified as 40-year-old Satya Patnaik of Bhubaneswar.

According to eyewitnesses, the mishap occurred around 12:30 pm. At least 30 workers were engaged in the construction work.

“We have rescued six persons. More people are believed to be trapped under the rubbles,” said Anil Kumar Sahoo, a local resident.

He added that the death toll was likely to increase as some of the rescued workers were critically injured.

Anil said a father and daughter-duo who was passing by the under-construction was seriously injured as a huge chunk of construction materials fell on them. They were rushed to Capital Hospital.

The condition of the father and daughter duo are said to be critical.

At least 15-20 injured workers were also rushed to Capital Hospital.

“We are engaged in the cementing work when suddenly a portion of the flyover collapsed,” said Amrit Kerketa, an injured worker said.

The construction work was being executed by the Division IV of the state public works department.

The BJP and Congress blamed the Naveen Patnaik for the tragedy.

“We have been complaining about the sub-standard work of the flyover. Even we had submitted memorandum to the chief minister through his work secretary Nalinikanta Pradhan. The chief minister who is the works minister never took our complaint seriously. Instead, he allowed the contractor and the public works department to change the original drawing of the flyover for inflating the project cost. This is a huge scam and needs to be investigated by CBI,” said BJP vice president Sameer Mohanty.

Congress leader Suresh Kumar Routray said the construction work was going on at slow pace for over 10 years and there was deliberate neglect to escalate the project cost for political funding.