India   All India  10 Sep 2018  Everyone has right to die with dignity: Chief Justice of India on euthanasia
India, All India

Everyone has right to die with dignity: Chief Justice of India on euthanasia

The Aruna Shanbaug case led to a change in euthanasia laws of the country. 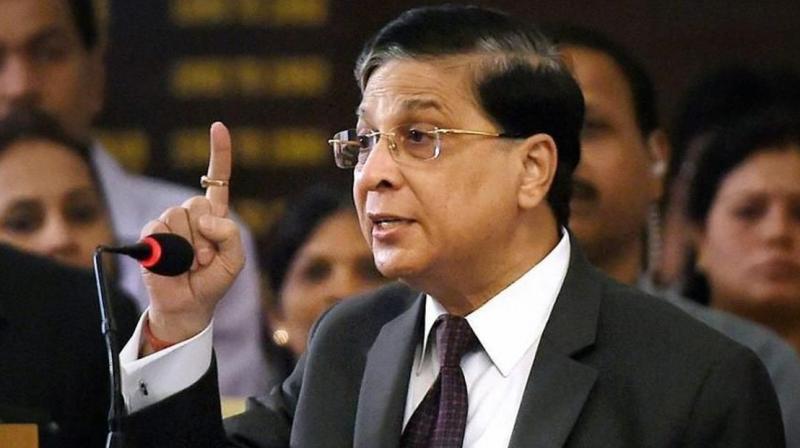 Dipak Misra noted that it is important for an individual to exercise rights granted by the constitution in order to develop the society and strengthen the democracy. (Photo: File)

Pune: Just a few days after the Supreme Court gave a landmark judgment by decriminalising homosexuality, Chief Justice of India (CJI), Dipak Misra said that each individual has the right to life as well as the right to live with dignity, but cases involving conflicting interest have to be dealt with in a balanced manner.

Delivering the Dr Patangrao Kadam Memorial Public Lecture Series at Pune's Bharti Vidyapeeth, the CJI, while referring to the Aruna Shanbaug case, touched upon the issue of conflict between two fundamental rights, and said that the verdict in such cases should be given after thoroughly studying the facts of the case and the fundamental structure of the Constitution.

The Aruna Shanbaug case led to a change in euthanasia laws of the country. The bench handling this case in 2017, recognised a living will by a terminally-ill patient for passive euthanasia and drafted new guidelines clarifying the way to execute the will and the role of the medical board in giving assent to the will.

Citing the Mazdur Krishna Shakti Sangathan case, the Chief Justice said that in situations where conflict arises between two fundamental rights or intra-fundamental rights in respect of some person, it becomes slightly difficult for a bench to give out the verdict. "No particular parameter can be fixed but yet the courts try and endeavor to fix certain parameters, it has to be judged on facts of each case, taking care of certain constitutional concepts," he noted.

Furthermore, Dipak Misra noted that it is important for an individual to exercise rights granted by the constitution in order to develop the society and strengthen the democracy.

"We have a constitutional democracy and it is conceded with a singular and a sole mission and purpose of securing its citizen's rights and liberties which foster and strengthen the spirit and growth of development in a society. Rights protected and guaranteed under a constitution are the fulcrum of any free society. We ought to live in a democratic and free society. As far as that concept is concerned there is no compromise. We have the rights and must exercise them within the constitutional parameters. These rights are interest recognised and protected by a rule of justice. If the rule of justice collapses, rule of law will automatically collapse. I must respect your freedom, you must respect mine and this is how we can build up a societal fraternity in a true sense," the Chief Justice said.

Speaking further on the importance of individual's right in a democratic country, CJI Misra said, "In a democratic setup, every right matters and no right is absolute. There is no hierarchical order in rights. A particular fundamental right cannot exist in isolation."

The CJI also cited an example of the 1975 Narendra Prasad case and said that in this case, the judicature observed that "A particular fundamental right cannot exist in isolation in a watertight compartment and one fundamental right of a person may have to coexist in harmony with the exercise of another fundamental right by others. So, we have to co-exist, therefore the rights have to balanced."