India   All India  10 Sep 2018  ‘PM Modi’s talk about discipline is undemocratic and misunderstood’
India, All India

‘PM Modi’s talk about discipline is undemocratic and misunderstood’ 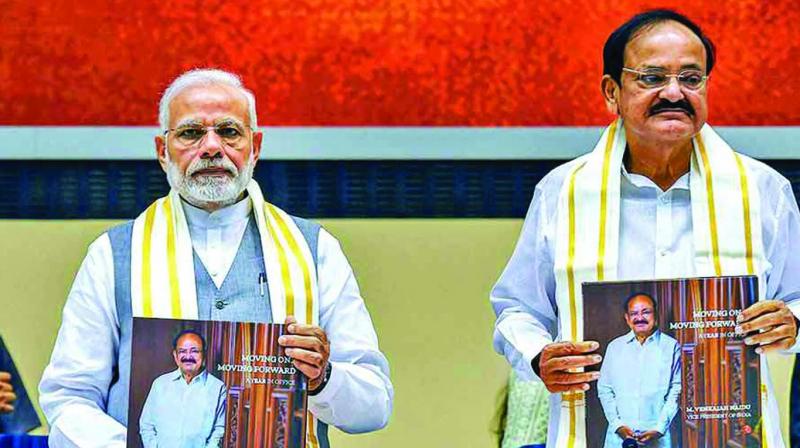 PM Narendra Modi and M. Venkaiah Naidu release a book during his first year as VP of India and Chairman of Rajya Sabha in New Delhi. (Photo: PTI)

I  am amazed at what Mr Modi said with such a straight face at a book launch in the capital. He said, calling for discipline these days is considered and branded autocratic. He was talking in praise of the Vice President, alluding to his role as the Speaker of the Rajya Sabha.

I don’t know whether to speak of the double think, thought crime or 2+2=5. Because, even if I want to think otherwise, I am reminded everyday of ‘1984’ the dystopian novel that George Orwell wrote more than forty years ago. What else would you call the Prime Minster’s words at a book launch recently, if not double think?

He said and I quote: “Venkaiah ji is a disciplinarian, but our country’s situation is such that it has become easy to call discipline undemocratic. If some one calls for discipline, he is branded autocratic... the whole dictionary is opened.”

I wonder what face Modi ji has to talk about discipline. I wish our Mr Prime Minister, truly understood it’s meaning.

For, in my mind and in the country’s mind, ghastly images are swirling and making us sick to the stomach. These images are making me ask you: Modi ji, where was the discipline when poor Pehlu Khan was lynched by mobs who had your overt and covert support? Why is Pehlu Khan’s blind mother still weeping and why is his widow staring blankly at a future she can’t see? Why did you not discipline the six men who lynched poor Pehlu Khan, even though he named them in his dying statement? This, despite the fact, that Indian law treats a dying man’s declaration as the strongest of evidences. So strong that the accused can be convicted solely on the basis of the premise that a ‘dying man can never lie’. This has been held up in countless court rulings, but not in Pehlu Khan’s case. Why? Because the people who brutally lynched the hapless milk seller were influential cow vigilantes. They have strong affiliations to Sangh organisations. And let me remind you — his was a slow, painful and undeserved death.

Why did you not discipline the people who filmed the lynching and spread it proudly, like an obscene badge of honour? Because they had done as your government had directed — saved cows from slaughter.

But, the cows were not going for slaughter and this is what Pehlu Khan told them repeatedly, whi-le they punched him in his belly and pulled at his beard.

He died. His companion escaped with an injured spine and their vehicle was smashed to pieces. Were you lamenting this lack of discipline, Mr Pri-me Minister Sir, at the book launch?

Or were you talking about how you had failed to discipline the MLA from Maharashtra who addressed a gathering of wildly cheering youth? He told them he would help them forcefully pick up any girl they chose to marry, regardless of whether the girls wanted this sort of an unholy alliance or not.

Perhaps Mr Modi took stage at that book launch to seek help because he wasn’t able to do a thing against the people who took out a tableau and collected money for Jodhpur’s Shambhu Lal who axed a man in the name of the infamous Love Jihad. Not only did he axe him, he got the grisly murder filmed by his young nephew and spoke into the camera waving his bloodied axe in our collective consciousness, leaving it in tatters. Isn’t Beti Bachao (Save the Girl), one of your biggest slogans? Was the discipline comment meant to mean that Mr Modi was trying unsuccessfully to reign in his own cadres, (and if that is the case then God help him.)

-Or was it aimed more at some draconian actions he has taken recently? He talks of disciplining people and we wonder when he would turn his attention to his cadres or fringe supporters or what have you, killing innocent people in the name of protecting cows?

-Or was he talking about trying to discipline motor mouth legislators who go to town distorting facts, history, science, mythology and all things which are sense into one meaningless khichdi?

-Or was he shaking his head over some brazen mi-nisters championing the cause of brutal murderers, even garlanding them and being photographed with them?

-Or perhaps Mr Modi is afraid that his social med-ia lynch mob is out of control? The ‘internet yodhas’ that he and Mr Shah regularly felicitate and spend lakhs on.

The viler they are, the more pats they get from their sahabs. Why else do they proudly proclaim th-at the Prime Minister of India follows their abusive, threatening, vile mouthed, obscene profiles on Twitter?

So my countrymen, you think 2+2 is not 5? Ask Mr Modi. He is will convince you it is. He will repeat it in so many ways, he will get his cadres to repeat it, his spokesmen to shout it on TV, so many times that it will become true.

Are you afraid of committing thought crime? Well, you should not just be afraid, you should be petrified.

The Eelgar Parishad arrests should prove to you that having a point of view different to that of the people in power, isn’t just a crime these days, it is punishable with arrest.

It is seeming more and more as if someone in the power corridors on Rais-ina Hill has taken it upon himself to implement ‘1984’, chapter by chapter, passage by passage.

This is ‘1984’ on steroids with a lavish dash of McC-arthyism. And as for discipline and democratic principals? Let us not even go there Mr Modi.

The writer is the chairperson of the AICC grievance cell.