Top military brass as well as senior officials of the Dassault Aviation, the makers of Rafale, will also be present at the ceremony. 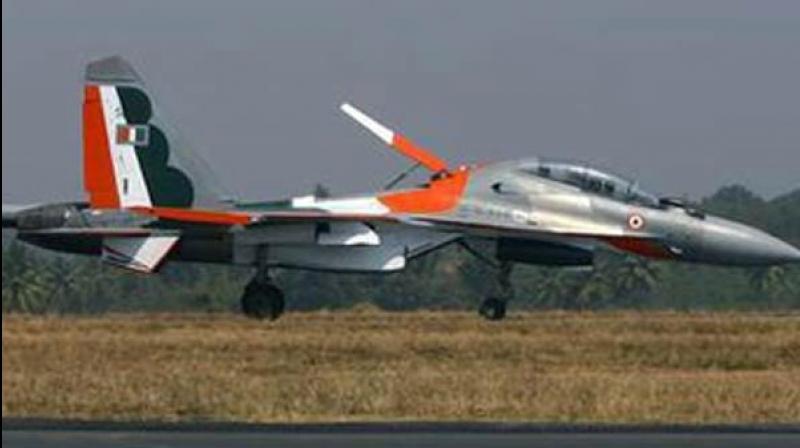 The Indian Air Force will deploy one squadron each of the Rafale combat aircraft at its airbases in Ambala in Haryana and Hashimara in West Bengal. (Photo: ANI)

New Delhi: Defence Minister Rajnath Singh will travel to France on October 8 to receive the first Indian Rafale combat aircraft manufactured by French firm Dassault Aviation that will come to India only next year.

"October 8 is auspicious for two reasons. It is both Dussehra and Air Force day on that day," government sources told ANI.

The Defence Minister will travel along with Defence Secretary Ajay Kumar and other senior officials to receive the aircraft from France on October 8, they said.

As per earlier plans, Balakot operations in-charge and current Air Force Chief Air Chief Marshal BS Dhanoa was to travel to receive the plane on September 19-20 from France.

Now, an Air Force team will visit France around the same time and sign documents with the French after which the Indian pilots will start training on the advanced Indian Rafale planes.

"Once they start training, they may also fly the aircraft once the Defence Minister and his team reach the location near Bordeaux," the sources said.

Though the planes would officially be inducted on October 8 into the IAF, they would start arriving in India only in May 2020 after refitment to Indian specifications and training of pilots and personnel.

They said top military brass as well as senior officials of the Dassault Aviation, the makers of Rafale, will also be present at the handing over ceremony.

The Indian planes have been equipped with a lot of India-specific enhancements, which have been fitted at a cost of around one billion euros.

Though small batches of Indian pilots have already trained on the French Air Force planes, the Indian Air Force would train 24 pilots in three different batches till May 2020 for flying the Indian Rafale fighter jets.

The Indian Air Force will deploy one squadron each of the Rafale combat aircraft at its airbases in Ambala in Haryana and Hashimara in West Bengal.

In September of 2016, India signed a deal with the French government and Dassault Aviation to acquire 36 Rafale fighter jets for over 7.8 billion euros to arrest the fall of combat squadrons and meet urgent requirements on the eastern and western fronts.