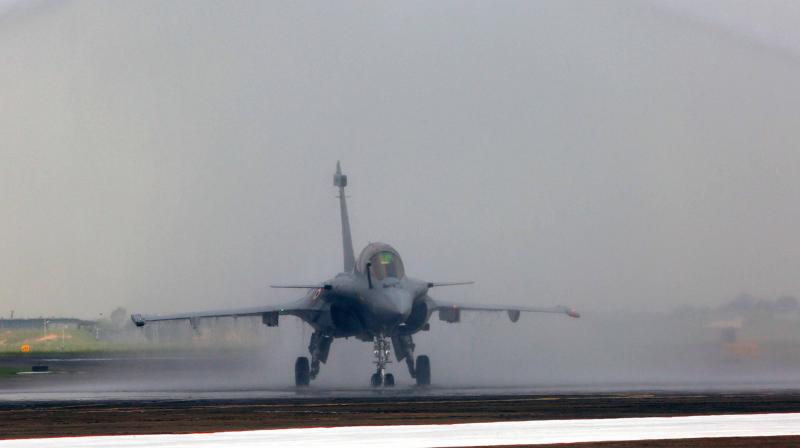 A Rafale jet at the Ambala air base.

Amid the rising border tensions with China at Eastern Ladakh, the Indian Air Force on Thursday inducted five Rafale jets during a glittering ceremony at the Ambala air base. However, the occasion also turned out to be an opportunity for the Indian political establishment to issue a subtle warning to a rampaging China.

In a clear reference to China, Defence Minister Rajnath Singh said the induction of five French-made multirole Rafale jets into the Indian Air Force is a "big and stern" message to those eyeing India's sovereignty.

"This kind of induction is very important for the kind of atmosphere that has been created on our borders," Singh also said at the ceremony.

Interestingly, Singh's stern message to the neighbouring country came hours ahead of an expected meeting between External Affairs Minister S Jaishankar and his Chinese counterpart Wang Yi on the margins of a Shanghai Cooperation Organisation (SCO) conclave in Moscow.

The much anticipated talks are taking place against the backdrop of a massive spike in tension in eastern Ladakh triggered by fresh face-offs between the two armies along the Line of Actual Control (LAC).

Earlier in the day, amid traditional 'sarva dharma puja', a ceremonial 'water cannon salute' to the Rafale jets and an aerial display featuring various breathtaking manoeuvres by the aircraft, the five Rafale jets were inducted into the 17 Squadron of the IAF.

The first batch of five Rafale jets arrived in India on July 29, nearly four years after India signed an inter-governmental agreement with France to procure 36 of the aircraft at a cost of Rs 59,000 crore.

Ten Rafale jets have been delivered to India so far and five of them stayed back in France for imparting training to IAF pilots. The delivery of all 36 aircraft is scheduled to be completed by the end of 2021. A second batch of four to five Rafale jets are likely to arrive in India by November.