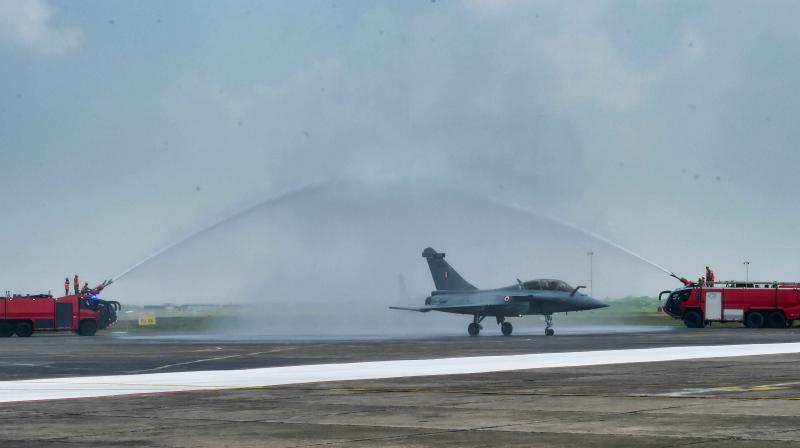 Rafale aircraft being accorded water salute during its induction ceremony, in Ambala, Thursday.

Amid growing border tensions with China in eastern Ladakh, the Indian Air Force inducted five Rafale fighter jets at a glittering ceremony in the Ambala air base on Thursday.

A traditional 'sarva dharma puja', a ceremonial 'water cannon salute' to the Rafale jets and an aerial display featuring various breathtaking manoeuvres by the aircraft marked their induction into the 17 Squadron of the IAF.

In a tweet, the IAF welcomed the "new bird" into its arsenal.

The air force also tweeted a video showing glimpses of the Rafale in action with IAF.

Glimpses of the Rafale in action with IAF. pic.twitter.com/WfohU5vMET

A fleet of indigenously-developed combat jet Tejas and Sarang helicopter aerobatic team of the IAF too displayed a range of aerial manoeuvres demonstrating their agility at the ceremony.

The first batch of five Rafale jets arrived in India on July 29, nearly four years after India signed an inter-governmental agreement with France to procure 36 of the aircraft at a cost of Rs 59,000 crore.

Ten Rafale jets have been delivered to India so far and five of them stayed back in France for imparting training to IAF pilots. The delivery of all 36 aircraft is scheduled to be completed by the end of 2021. A second batch of four to five Rafale jets are likely to arrive in India by November.

The Rafale jets are India's first major acquisition of fighter planes in 23 year after the Sukhoi jets were imported from Russia.

While the first squadron of the Rafale jets will be stationed at Ambala air base, the second one will be based at the Hasimara base in West Bengal. Out of 36 Rafale jets, 30 will be fighter jets and six will be trainers. The trainer jets will be twin-seater and they will have almost all the features of the fighter jets.